Scientists can now distinguish mirror-image substances using a new method. This distinction is crucial for drug development because two different variants could have completely different effects on the human body. The new Nature Photonics method was developed by researchers from PSI, EPFL and the University of Geneva.

There are two types of molecules that exist. They are structurally identical, but they are mirror images of one another. This is what we see in our right and left hand. These are called chiral molecules. These two mirror-image forms, referred to as enantiomers, are their two mirror-image counterparts. Because different effects can be caused by chirality, it is particularly relevant to biological molecules. It is crucial in biochemistry, toxicology, and drug development to distinguish enantiomers so that only the desired variants of a drug can be incorporated. Researchers from the University of Geneva, EPFL, PSI have now developed a new method to distinguish enantiomers from one another. This is called helical dichroism (X-ray domain).

Circular dichroism (CD) is the most established method of distinguishing between enantiomers. This method uses light that has a specific property, known as circular Polarization. It is sent through the sample. The enantiomers absorb this light to a different degree. CD is used extensively in analytical chemistry, biochemical research, as well as in the pharmaceutical and food industries. CD signals are weak, however. The light absorption for two enantiomers is just below 0.1 percent. Although there are many strategies to amplify the signals, these only work if the sample exists in the gas phase. However, most studies in chemistry or biochemistry are done in liquid solutions, mostly in water.

The new method, however, exploits helical dichroism (or HD) instead. This phenomenon can be explained by the shape of light, rather than its polarization. The wave front curves into a helical shape.

The researchers at the Swiss Light Source SLS (PSI) were able to demonstrate that enantiomers can also be distinguished using helical light X-ray. They demonstrated this using a powdered sample of the chiral complex iron-trisbipyridine, which was provided by the University of Geneva researchers. They obtained a signal that was many orders of magnitude stronger then what could be achieved using CD. HD can also work in liquid solutions, making it an ideal prerequisite to chemical analysis applications.

This experiment required X-ray light to have the correct properties. Researchers were able achieve this feat using spiral zone plates, which are special diffractive Xray lenses that they used to send the light through the plate before it reached the sample.

"With the spiral zones plates, we were able to give our Xray light the desired form and therefore an orbital angular momentum. These beams are also known as optical vortices," states Benedikt Rosner (PSI researcher), who created and manufactured the spiral zone plates.

Jeremy Rouxel from EPFL, the first author of this study, explains that "helical Dichroism provides a completely different kind of light-matter interaction." It is possible to use it to distinguish between enantiomers.

1 Sri Lankan president calls Russian leader seeking... 2 LHCb discovers 3 new exotic particles: The pentaquark,... 3 High harmonics show the movement of electrons and... 4 As the Sydney flood emergency is eased, the flood... 5 Special light is needed to reduce the size of particle... 6 Brittney Griner admits she is guilty of using unintentionally... 7 Paleontologists Discover New Dinosaur with Tiny Arms... 8 Research suggests that people who report childhood... 9 What is "O"? A Ability that Could Explain... 10 To curb inflation, Sri Lanka's central Bank raises... 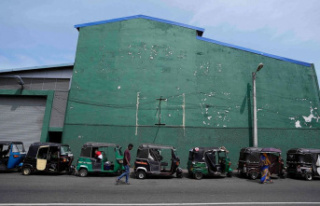