I have an absolutely hilarious number idea for the next ComediHa galas! this summer.

I have an absolutely hilarious number idea for the next ComediHa galas! this summer.

A comedian would only have to take certain editorials or columns recently published in English-language newspapers in Canada, translate them into French, and read extracts from them on stage. Bingo! Laughter guaranteed!

I swear to you, you will piss in your panties!

The comedian who would like to write this issue would only have to translate Kelly McParland's latest editorial published Monday in the National Post.

The columnist affirms in the most serious way that the purpose of Bill 96 is to "purify the air of Quebec so that we no longer hear the sound of English".

Just that, we're already slapping on the thighs.

We continue reading: “In Quebec, English in all its forms is considered a threat to the very existence of Quebec culture and must be chased to a corner, or even eliminated altogether.”

We laugh, we laugh! His vision of Quebec is so caricatural. We will not have laughed as much since the French magazine Elle à Table called Ricardo a “gentleman trapper” and “ambassador of New France”.

Mr. McParland is worried about the adoption of Bill 96: “Will spyware be placed in Montreal cafes to monitor the number of coffees ordered in English? »

We laugh, we have fun!

The columnist explains to his readers in Kapuskasing in Ontario, or FlinFlon in Manitoba, that in Quebec: "the use of English is reserved for the home or a limited circle of consenting participants, out of earshot of the ardent Francophones who do not want to be disturbed by reminders of its existence.

Wow, they smoke good in Toronto!

Well yes, thing, we hate English so much in Quebec, we can't bear to hear the slightest word about it... that our beautiful Charlotte Cardin has just triumphed at the Junos with an album (Phoenix) including twelve songs out of thirteen are “in English”.

“One of these days, English speakers living in Quebec will get the message that they are really not welcome,” adds the National Post columnist.

No doubt he has never heard of McGill, Concordia, Bishop's, Dawson, John-Abbott, Marianapolis, Vanier, the Jewish, the Children's, the MUHC, The Jeffery Hale – Saint Brigid's Hospital, the Centaur, the Segal Center for the Performing Arts, etc.

But wait. You will really giggle when you hear the conclusion of this columnist.

He concludes, hold on tight, that Quebec should take the example of Ontario...for its way of dealing with linguistic minorities.

Ontario, you! We screw up. We dilate the spleen. What am I saying, we're pissed off!

“It is fair to say that Ontario treats its (Francophone) minority with more care, respect and accommodation efforts” than Quebec does with its (Anglophone) minority.

And the columnist concludes: "A population that has confidence in itself does not need to diminish others to feel strong".

Definitely, Kelly McParland should already be in the running for a special prize at the next Les Olivier gala.

In the category “Involuntary humor”.

1 Robles will meet this Thursday at the Pentagon with... 2 The Alicante Water Museum will host the presentation... 3 Montero, on the assumption of responsibilities by... 4 The IES 'Consaburum' team, winner of the... 5 Open Tennis Case: The mayors of Carmena Mayer and... 6 Ayuso will support the conscientious objection of... 7 An autonomous and empathetic car: they create a system... 8 Quim Torra and Josep Costa sue Pedro Sánchez and... 9 Alex Corretja: "Alcaraz is among the top favorites... 10 Transferred to the hospital three men injured by the... 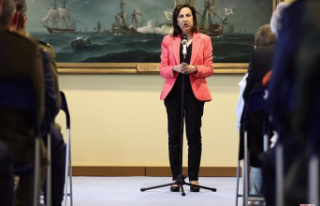 Robles will meet this Thursday at the Pentagon with...