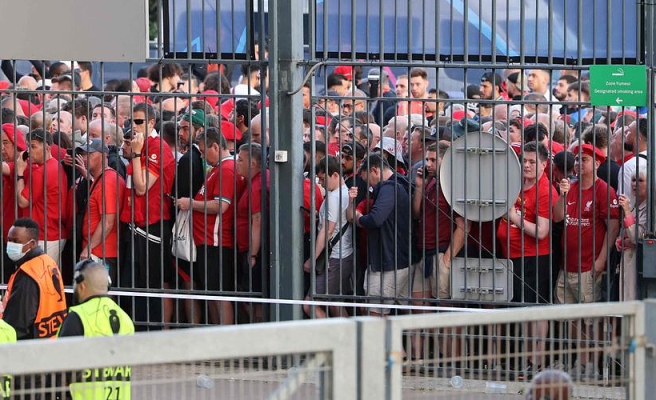 According to Gerald Darmanin, Home Secretary, several thousand fake Liverpool tickets were responsible for Saturday's chaos in the Champions League final. However, the trail of fraud he has left behind leaves doubts, especially on the English side.

The French authorities claim that the presence of counterfeit tickets in large numbers was discovered during pre-filtering at the Stade de France, on the English side managed and controlled by the stewards from the French Football Federation. The Minister of the Interior stated Monday that "70%" of the pre-filtering paper tickets were fake on the English side. He was unable to provide exact figures. He spoke simply of the 30,000-40,000 Liverpool supporters who were present at the stadium on Saturday with "false tickets" or without tickets.

Darmanin says that the 22,000 Reds tickets were printed on paper, at Liverpool's request. This "undoubtedly contributed" in fraud. The stewards used a chemical pen to mark the tickets. The pre-screening was not successful for fans carrying fake tickets. This created a bottleneck that forced the Paris police chief, who had been using a chemical pen on the back of the paper tickets, to lift it.

This question is hard to answer precisely. While the minister spoke of the 70% rate of counterfeit banknotes being detected, he did not give any figures on the actual number of banknotes that were verified. We would get more than 40,000 counterfeit tickets if we were to use the same ratio as Monday's Minister. The minister's entourage said that it was still too early to make a precise estimate. On Monday, a government adviser confided that "it's a wet fingers estimate, so we will need to wait until we have more precise elements to be able to give a fair estimate".

Be that as it might, the fraud thesis, which was organized across the Channel would be a first in the history Champions League ticketing. A source close to government said that although the English authorities warned of the possibility of false tickets being present, they did not warn us of their magnitude. The Saint-Denis public procuror's office has assigned a Parisian judicial Police investigation to investigate this matter. This question of counterfeit tickets will be dealt with in the independent investigation that UEFA opened Monday into the Stade de France fiasco.

"It's bullshit," tweeted Gary Lineker (ex-England international) shortly after Monday's minister's press conference. According to the English press, this thesis of massive fraud allows it to be exonerated from responsibility for Saturday's fiasco. Ryan Paton, a columnist for Liverpool Echo, stated that the real reason Parisians were put at risk during that traumatic evening was because of the failures at UEFA and French police. .

Amelie OudeaCastera, the Minister of Sports, and Gerald Darmanin, on Monday continued to "peddle" the story of chaos created by Reds fans who bought fake tickets. The explanation of counterfeit notes is marginal and they inflate it because they need an explanation for their failures," says the leader of a large support group, who was present at the Stade de France on Saturday.

Although counterfeit tickets have been associated with sporting or cultural events in the past, it seems that the French authorities gave them a weight that was too heavy for those present at Saturday's match. Daniel Austin, 27, a Liverpool fan, said that these were lies by the worst liars. Kaveh Solhekol, an English journalist, said that they first tried to blame Liverpool fans and now they are trying to blame fake tickets.

1 The price of oil shoots up and marks a maximum since... 2 Casseneuil: Cultural roaming in song 3 Natacha Polony, Claude Serillon are guests at the... 4 Grenoble. Man arrested after attempted burglary 5 The Lyceum denies Roberto Alagna 6 They file a complaint against two senior officials... 7 According to INSEE figures, inflation rose to 5.2%... 8 WHO is not concerned at the moment about a worldwide... 9 Canada: Trudeau wants to ban handguns 10 Sainte-Livrade-sur-Lot: Firefighters practice at Livradais... 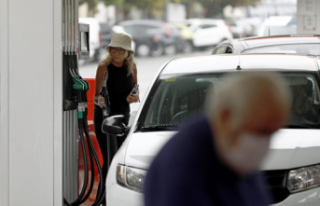 The price of oil shoots up and marks a maximum since...