The little more than 400 residents of the Cuenca town of Buendía have an ATM thanks to an initiative promoted by the regional government and which is the result of the protocol signed between the Ministry of Agriculture, Water and Rural Development and the Castilian Manchega Network of Rural Development (Recamder), in December of last year. 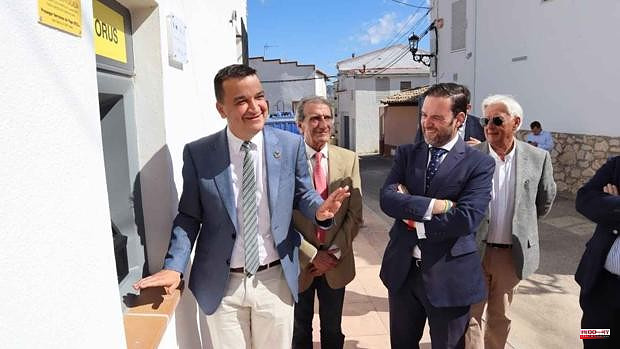 The little more than 400 residents of the Cuenca town of Buendía have an ATM thanks to an initiative promoted by the regional government and which is the result of the protocol signed between the Ministry of Agriculture, Water and Rural Development and the Castilian Manchega Network of Rural Development (Recamder), in December of last year.

Everything, with the aim of contributing to the fight against depopulation and mitigating the financial exclusion of people who live in towns, something that has become a reality thanks to the signing of a collaboration agreement with the company Prosegur Cash, has informed the Board in a press release.

The Minister of Agriculture, Water and Rural Development, Francisco Martínez Arroyo, has traveled to Buendía, where this new service that is so necessary for the residents, mostly older people, who are forced to move to smaller municipalities, has been launched. surrounding areas to be able to access this service.

This ATM has been located in the vicinity of the Multipurpose Social Center, a space that the City Council itself has ceded and that is the first of the hundred planned - for which there is an investment of 3.5 million euros.

Its start-up has meant today for Buendía a day of celebration and its achievement comes hand in hand with the decision of the Alcarria Conquense Rural Development Group, thanks to the fact that the regional Executive has directed the funds of the rural development program of the region to what is done in the groups in the territory. And, "the groups have had the thought of the people who live in the territory and need services," said the counselor.

Accompanied by the mayor of the town, Gregorio Martínez; the president of Recamder, Jesús Ortega; the president of the Alcarria Conquense group, Vicente Caballero and the representative of Prosegur Cash, Policarpo Ledesma, among others, Martínez Arroyo has indicated that the implication is "total and absolute with initiatives like this", for which he has thanked everyone for "having been pulling the cart, because it hasn't been easy."

1 More than seventy Ukrainian refugees receive their... 2 The ETA member who was released after a resolution... 3 The Generalitat awards 416 local police officers from... 4 Salah, sunk after Paris: "I would give all my... 5 The Supreme Court definitively closes the case for... 6 The Supreme confirms seven years in prison for running... 7 The Government of Castilla-La Mancha asks the ministry... 8 Barcelona City Council offers Primavera Sound to set... 9 The Canary Islands will do their monkeypox tests,... 10 Convicted of sexually abusing a 12-year-old girl with...