Sara Peñalver visited Chorreras del Cabriel, like so many other tourists, six years ago and stayed the night in Enguídanos. 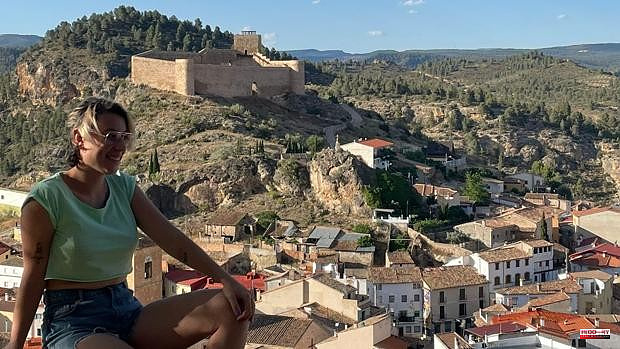 Sara Peñalver visited Chorreras del Cabriel, like so many other tourists, six years ago and stayed the night in Enguídanos. At the time of her, she remembers that she thought: what will life be like for the people who live here? She had idealized towns since she was a child, when she spent the summers in Clares, a small village belonging to Maranchón, in the Señorío de Molina-Alto Tajo region, grandmother Pepa's place of origin. Born in Azuqueca de Henares 32 years ago, Sara worked there as a social educator in a center for the protection of minors. Tired of surrounding herself with the same circle of people and doing the same things, she felt "a bit stuck."

So he started reading on Facebook the experiences of people who had decided to move to town and start from scratch.

Precisely, thanks to social networks, he learned about the Arraigo project, defined as "a bridge" between the city and the rural world for those who want "a change of life". Now, coincidences of fate, she has been living in Enguídanos for two months and she declares herself "very happy with her decision, very excited and very happy".

Like Sara, the Arraigo project has already managed to fulfill the wishes of 325 families in Spain and has another 9,000 on the waiting list. Last week, its director, Enrique Martínez Pomar, and the president of the Cuenca Provincial Council, Álvaro Martínez Chana, presented the results of an alliance that in just a few months has found new neighbors in Saelices, Villaescusa de Haro, Cardenete and Belmonte, apart from Enguídanos. More are expected to arrive in Huete and Cañete in the coming weeks.

«On Christmas 2017, through the curiosity of a son of mine, who wanted to see the abandoned towns of the province of Soria, we went to visit and found a desolation within a beauty. I questioned how these towns, being so beautiful, could be so abandoned and investigated this matter. We saw that there were people who wanted to come to the towns, but that there were barriers that prevented it, "explains Enrique.

The main difficulty, without a doubt, is housing, which is scarce. «Renting housing in the city is a business, but in the towns it is not a matter of price. It's about getting to know the person”, says the director of the project. The first roots arose in towns such as Navaleno, Rebollar, Almarza or Sotillo del Rincón, all in Soria. Later, the project has grown to be present in eleven provinces and work with four councils. The pandemic has doubled the requests from people who want to try the experience.

Sergio de Fez, mayor of Enguídanos, learned about the Arraigo project from the Diputación, which sent a letter to all the municipalities interested in participating. After having to fill out a report and visit the villages, ten were selected last winter. Located in the Serranía Baja Cuenca, in Enguídanos there were about 2,000 residents in the post-war period, there were almost 600 20 years ago and there are just over 300 today. The population, as can be assumed, is very old. The mayor's grandfather emigrated to Castellón in 1959. His parents met in the Valencian city and Sergio and his brother were born. Little by little, everyone has returned to Enguídanos, "although that is not what usually happens," acknowledges the alderman.

Sara works in the municipal toy library and spends another three hours serving meals in a restaurant that also has hotel service. Sergio believes that "the quality of life is indisputable, but to have it you need very basic things: a job that provides economic stability, a home and a social and leisure environment that makes you take root in the municipality." Enguídanos is 26 kilometers from the A-3, 85 from Cuenca, 164 from Valencia and 230 from Madrid. A coworking center has just been opened in the town and fiber optics are being installed, which will facilitate teleworking.

“Urbanites always ask me the same thing: do you live here all year? And also if we don't get bored. I see that there is a lot of ignorance of what real life is like in the towns. Here there are very valid people, who have chosen to stay and live and not because they have no other, "says Sergio. He thinks the same Enrique: «There is little knowledge of the rural world. You meet people who don't want the rooster to crow or who are bothered by the ringing of bells.

“You have to study the towns carefully and you have to meet the families who want to come. When there is deep knowledge through the municipalities, we begin to connect families. The technician on the territory is essential. He is in charge of finding a home or talking to companies so that they hire the new neighbors », insists the person in charge of the Arraigo project.

Enrique adds that the rate of families with children who leave the town every year is three percent and that of single people is much higher, exceeding 20 percent. Sara hasn't had time to miss anything yet. Of course, when she revealed that she was going to live in Enguídanos, she had to listen to comments such as "you'll get tired" or "you'll see when winter comes." Instead, Grandma Pepa has experienced the transfer as if she were the protagonist. At 98 years old, she has the illusion of a new future for her granddaughter.

1 Paula Sevilla flies in Nerja 2 Foreigners in their own city 3 A group of teachers and professors decide to organize... 4 Alejandro Chicharro cuts the only ear in the semifinal... 5 The PP will seek a new fracture of the Government... 6 This is the plane that transports 'The Beast'... 7 Biden's 'Air Force One', the most recognizable... 8 Innovative entrepreneurship shakes off the fear of... 9 Textile sales, in tension due to inflation and the... 10 A huge security and logistics device travels with... 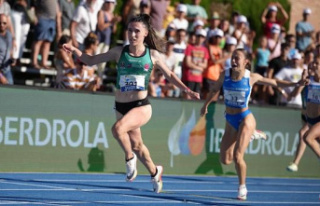