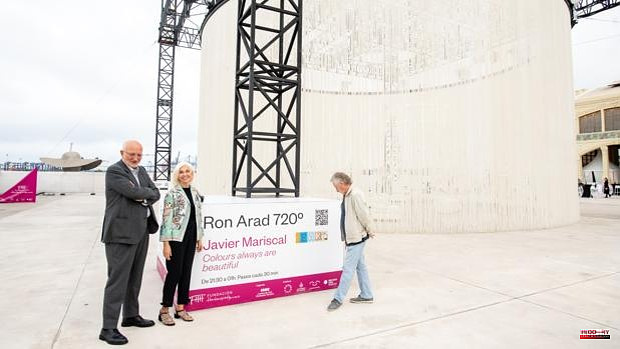 The Hortensia Herrero Foundation presented this Friday the immersive art installation by Israeli designer and architect Ron Arad in La Marina de València. Ron Arad 720º is a proposal that unites art and technology through a monumental structure, called Curtain Call, which will house, until August 28, projections of outstanding artists such as Mat Collishaw, Greenaway

“I have wanted to organize an immersive exhibition in Valencia for a long time. It's finally here. It is very gratifying for me to be able to bring this audiovisual installation here and to be able to invest in my city, in my land. It is a pride to be able to bring art to Valencia to make it available to all Valencians, thus contributing to achieving one of the objectives of the Hortensia Herrero Foundation that I chair: to turn the Valencian Community into a cultural benchmark.

And even more so in this year in which Valencia is the world capital of design”, explained Hortensia Herrero, director and patron of the foundation that bears her name and promoter of this initiative.

«When I discovered the curtain that the designer and architect Ron Arad had created, I knew that we Valencians had to see it. I would like visitors who come to discover RON ARAD 720˚ to live an artistic experience with all 5 senses and for people who are not used to approaching a museum to start looking at total art from another perspective, another point of view, perhaps more fun, that they get into the work, that they live with it, ”said Hortensia Herrero during the presentation, which was attended last night by more than two hundred people.

The piece designed by Ron Arad is in the form of a circular curtain eight meters high. Composed of 5,600 silicone rods suspended from a ring 18 meters in diameter, it allows images to be projected to be viewed from both inside and outside. The result is a multisensory and immersive 360-degree experience where the public becomes the creator and spectator of the artistic work.

The Hortensia Herrero Foundation has brought four exhibitions to the city of Valencia in the last five years. Now, change the format and also the location. Hortensia Herrero explained the reason for this decision: «As for the chosen setting, it could not be other than La Marina, which has become a pole of attraction for entrepreneurship, innovation and the image of Valencia in the 21st century. In addition to being an area highly visited by tourists, it is also very familiar to the Hortensia Herrero Foundation, since EDEM moved here in 2015 and we put up the sculpture of “La Pamela” in 2018, with which the Ron curtain will now coexist for 3 months. Arad».

Each of the participating artists uses the Arad space in a different way. The video projections Transformer and Sordid Earth are the contributions of the British Mat Collishaw, one of which, inspired by the Fallas de València, has been created expressly for the exhibition. Colors are always beautiful is Javier Mariscal's piece, a projection of typographic forms followed by animated characters, such as the mascot Cobi, who dance to the rhythm of Niño Josele's flamenco guitar. The Greenaway brothers

The opening was attended by the Valencian designer Javier Mariscal, representing the participating artists, to whom Hortensia Herrero dedicated a few words of recognition. “I want to thank the artists. To Ron Arad, one of the most important designers in the world; to Javier Mariscal, one of the most international Valencian artists, Mat Collishaw, who has designed a piece especially for this exhibition, which envelops the viewer in a walk through the Fallas de València, our great festival. Mat is already a good friend who works for a very special project for the future Hortensia Herrero Art Center; and the Greenaway brothers, for their shocking film.

The designer Javier Mariscal explained during the opening that "the Curtain Call is a piece designed ten years ago for the Roundhouse in London, an old train station." The result is an installation "in which you can enter and exit, the images surround you and it gives a lot of play as it is located next to the sea", he added. Regarding Ron Arad, he stressed that "he is one of the most powerful designers, surely you have sat in a chair designed by him without knowing it," he joked.

Ron Arad 720º is part of the official program of World Design Capital Valencia 2022. Access to the immersive exhibition will be free. The screening hours will be from 9:30 p.m. to 1:00 a.m. from Monday to Sunday.

1 Schedule and where to see Swiatek - Gauff, the women's... 2 Meadows will not be charged for the ex-Trump aide... 3 McCormick gives in to Oz during the Pennsylvania GOP... 4 Charli D’Amelio looks stunning in a Neon Yellow... 5 Katie Maloney Responds to Raquel Leviss' Observation... 6 Kylie Jenner sunbathes on a boat in a Sexy Silver... 7 Eva Mendes says "It's all a team effort"... 8 Joe Don Rooney, Rascal Flatts' DJ, Pleads Guilty... 9 Lala Kent reveals that she got her 'Boobs done'... 10 Retired police officer arrested outside U.S. Capitol... 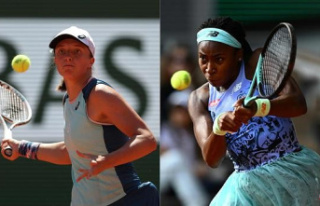 Schedule and where to see Swiatek - Gauff, the women's...