On the long straight of Jesi, the city that remembers the deceased by hit-and-run Michele Scarponi, a champion bows. 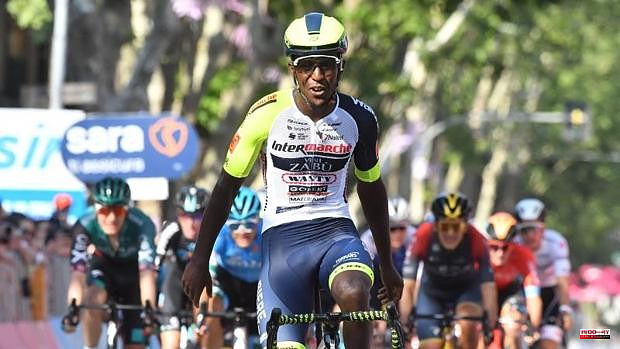 On the long straight of Jesi, the city that remembers the deceased by hit-and-run Michele Scarponi, a champion bows. The phenomenon Mathieu van der Poel, protagonist of so many cycling covers for his heroics, raises his thumb and blesses the stature of Biniam Girmay, who flies from the right of the road to achieve the first victory of a black rider in a grand tour of stages . The Giro salutes the black jewel of the peloton, who has already provided enough clues to be considered a budding figure in the sport. Girmay celebrated in hospital, where he had to be transferred after a champagne bottle stopper hit him in the eye.

The history of Africa in cycling is the reflection in the life of a continent that pursues happiness from its economic deficiencies.

A giant asleep and robbed so many times that it is difficult not only to wake up but to turn around to progress. There is no chronology, a memory, of African cyclists in the Tour, the Giro or the Vuelta because they have barely existed.

KevinReza, Natnael Berhane, Merhawi Kudus, Daniel Teklehaimanot... They all tried with adverse luck, except for Teklehaimanot, who became a celebrity for the children of the continent by being the first professional from black Africa to participate in a high-level race. level (the Vuelta a España 2012) and then assume for a few days the jersey of the red points of the mountain in the Tour (2015).

Much further back, in the cyclist Pleistocene so typical of fables and legends, is the Tunisian Ali Neffatti. In 1913 a young rider marked the tenth Tour in history. Not only because on his head he wore a circular red Arab cap instead of a cap. He was the first African cyclist to challenge for the Tour.

More recently, the story of the Algerian Abdel Kader Zaaf stands out, who competed between 1950 and 1952, when the time of the national teams on the Tour, with a team from 'North Africa'. Kader Zaaf fell victim to sunstroke in a vineyard and was doused with wine by the winegrowers. The legend embellished the anecdote, since he wanted to resume the march drunk and in the opposite direction.

Biniam Girmay (22-year-old Eritrean) is a son of his ancestors who has improved and, incidentally, has denied that old theory according to which cycling was not an appropriate sport for black Africans. Girmay demonstrates with his successes (a stage in Mallorca, the classic Ghent-Wevelgem, the victory this Tuesday in the Giro) that the absence of his race has more to do with the lack of culture and tools than with issues physiological.

Girmay used to ride a bicycle to school every day, as is the custom for children in her country. A means for mobility and displacement more than for the competition that seduced the kid in his native Asmara. A child like any other who vibrated with the successes of Alberto Contador or Chris Froome when they put the Tour on television.

The cyclist who now beats Van der Poel left his life behind at the age of 17 to emigrate to Switzerland, to a high-performance center, where he measured himself and once beat Remco Evenepoel. Last year, in Belgium, he already gave an account of his progress by proclaiming himself runner-up in the U23 world and earning the first silver medal in history for a black cyclist.

Now that his explosion is a fact, his career will become historic every time he stands out or wins. The first black cyclist to win a stage of the Tour, or the Vuelta, or a monument, or a world championship.

In the stage of the Giro that ended in Jesi, Girmay and his team maneuvered successfully against the worst possible rival, Mathieu van der Poel. It is crazy to see a team like Alpecin, leaders of the second division, line up a peloton in the Tour or Giro because they trust their star finisher. And the Intermarché, a group of relegation places, acted similarly, fighting for victory against the prodigy Van der Poel.

The Dutchman tried in every way, frantic and excessive, volcanic and always attacking, contemptuous with the calculator, unique in his kind. And the Intermarché always protected the option of Girmay, a sprinter who surpasses fourth-class levels at full speed. Juanpe López handled himself with the same solvency, seven days already with the pink magic of leader.

The sprint between Van der Poel and Girmay was wonderful. Powerful, intense, long and definitive in its outcome. It seemed that the phenomenon Van der Poel (two Tour of Flanders, Strade Bianche, Amstel Gold Race, stages and leader of the Tour, stage and leader of the Giro) came back in the final stretch to Girmay, but due to overheating what he did was give up and assume the defeat. He stopped pedaling, unable to pass the African, and gave a thumbs up.

The African celebrates it in a big way on the podium. So much so that the champagne stopper pops out early and hits him in the left eye. The cyclist was transferred to the Carlo Urbani Hospital in Jesi for a review.

1 Tim Stützle's injury would be less serious 2 Legislative: agreement with LREM or not? LR Damien... 3 Euskadi plans to create half a thousand places in... 4 WHO raises the number of cases of hepatitis in children... 5 TV stars and a hooded colossus at the heart of atypical... 6 Girmay makes history by being the first black African... 7 The booster dose of anti-COVID vaccine authorized... 8 Tehran confirms the arrest of two Frenchmen in Iran 9 Northern Ireland: London intends to unilaterally modify... 10 Giro: Girmay wins the stage and goes to the hospital... 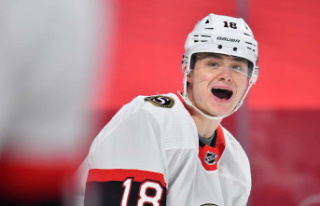