After 14 years of abstinence, Rot-Weiss Essen freed itself from the tormenting shackles of lower-class football: Promotion to the 3rd division was successful on the last day of the game in a long-distance duel with Preussen Münster. 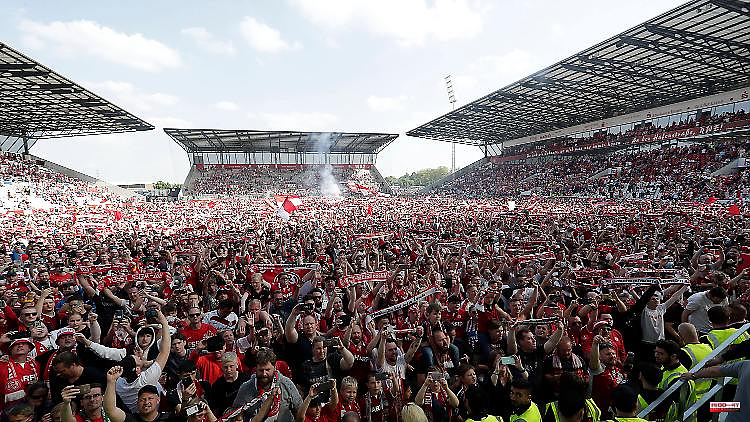 After 14 years of abstinence, Rot-Weiss Essen freed itself from the tormenting shackles of lower-class football: Promotion to the 3rd division was successful on the last day of the game in a long-distance duel with Preussen Münster. The screenplay means well with those who have been desperate for years.

It was almost a four-hour dance with its own panic. One last therapeutic group session in this hated "league of pigs". It began at 12 o'clock with the opening of the gates on the legendary Hafenstraße in Essen, Borbeck district, it ended with complete euphoria, with a blissful storming of the pitch and with the picking of the penalty spot. How the women of SG Essen Schönebeck should still contest their fight for relegation in the Bundesliga on Sunday was of no interest to anyone on this Saturday afternoon (small spoiler: they play in the "Am Hallo" sports park). The captive giant from the Ruhr area, Rot-Weiss Essen, had torn itself out of the shackles of the regional league and returned to professional football, to the 3rd division. After an ultimate showdown, the road was less thriller than feared.

The former coal and steel metropolis was cooking again like in the golden days. The celebration alarm was announced in the Whatsapp groups and forums. Thousands of them marched from Hafenstrasse into the city in the late afternoon. A march of liberation after twelve years of imprisonment in a league that has plenty of tradition, such as arch-rival Prussia Münster, or Alemannia Aachen and Wuppertaler SV, but at least as much rebellious provincialism as Wiedenbrück, Wegberg-Beeck and Straelen. Now history for Essen, bitter reality for Münster. The two clubs started matchday 38 with the same number of points - more drama is not possible.

And on Hafenstrasse they have a damn kinship with fate. In the red and white perception, fate is the greatest opponent of this cult club. Conspiracy myths have been told in the past few weeks, which essentially revolve around the fact that a higher, dark power wants to prevent the resurrection of this giant. In fact, Red and White faltered in this showdown. Coach Christian Neidhart was dismissed from office two games before the end. The most successful coach in club history in terms of points. He scored 2.29 points on average, more than Julian Nagelsmann in his debut season at Bayern. Crazy.

But "crazy" is not a category in which they think in Essen. Also not rational. Eating, that's just emotional. And so the bosses sensed that a new "impulse" was needed to kiss the regional league star ensemble awake again in order to avoid a déjà vu with the previous year. At that time, the U23s from Borussia Dortmund emerged as a happy victor from a crazy duel (93 to 90 points). While Essen cried collectively. They did that this time too. But this time just out of luck. A whole Emscher poured out of the eyes of those who had been desperate for years.

Rot-Weiss Essen is a symbiosis of love and suffering. Inextricably linked. But this Saturday blessed only with a conjugal intimacy. After the Prussians' blunder last week (only 0-0 against Wiedenbrück), they actually felt that it could finally work. Faith had pushed aside the doubts of the past few weeks. The fatal firecracker throw in the home game against Münster was forgotten. Forgotten were all the games that suddenly couldn't be won anymore. Forgotten was the painful beating in the semifinals against Wuppertal in the Niederrheinpokal. The two antics about ousted captains were forgotten. And forgotten this Saturday was the dismissal of coach Neidhart, with whom RWE had enchanted the DFB Cup for rounds last year.

From 2 p.m., with kick-off, there was only RWE, only football, faith, cheering. And the heroes on the pitch, who "should never give the club a 4th division again", delivered. After 28 minutes, Cedric Harenbrock scored to make it 1-0. The Hafenstraße, this legendary, powerful place that has lost nothing of the myth of the Georg Melches Stadium after the new construction, trembled. And Hafenstrasse shook a little more when the live ticker reported ten minutes later that Joshua Schwirten had scored for 1. FC Köln II in Münster. Now it took a miracle to prevent Essen's rise. A conspiracy. A myth among fans says that RWE is always somehow doomed to failure. This belief in "fucking around" lasts until the final whistle. Until everything is clear. It's an emotional thing, not a rational one. And it lies hidden in the history of this giant.

RWE is a powerful phenomenon. A legacy of the old district. That may be many clubs in this region of football romantics and people of the heart. Or want to be. But only a few have preserved the rocked-out charm like the people of Essen. Even if a lot of money is also being handled here. "Cultural assets worth protecting since 1907" is the club's slogan. This heritage is now back on the bigger stage. Not on the big stage. The people of Essen used to dance there very successfully. But that was even longer ago than the shifts in the shafts. It is well over half a century ago that RWE was a strong player in German football (cup winner 1953, champion 1955), but in 2007 the red and white were still playing in the second division. The low point was reached shortly thereafter when the club was relegated to the NRW-Liga in 2010 and was only fifth-rate.

In the 60th minute, Simon Engelmann, the goal phenomenon of the regional league, scored to make it 2-0. Ecstasy. Or is there another word of increase? Thorben Deters equalized in Münster. But on Hafenstrasse everyone knows: Prussia must, as of now, score five goals to pass. Possible, but actually impossible. And so they dance, sing and scream the panic from their souls in the stands. 16,650 people was in the stadium, sold out. What a setting. What a choreography before kick-off. If a player has not yet understood the dimension of the following 90 minutes, he now got it in red on white in all clarity. However, no footballer left any doubts - and when it was over in Essen and Prussia threw themselves 2-1 into the final moments of added time, the madness broke out.

The fans flooded the field with their tears, their happiness and plenty of pyrone fog. They celebrated with the team that had prepared part of the stands for their promotion party. It is a squad that does not stand for miracles, but promised great things. Despite painful departures like Amara Condé (1. FC Magdeburg) and Marco Kehl-Gomez (Türkgücü Munich). However, top players such as defense chief Daniel Heber, probably the best central defender in the league, striker Engelmann, or Isaiah Young, who was outstanding this season, could be retained.

But that was just the overture, because the Essen team garnished their expensive top squad with professionals with experience in the first and second division with two non-club sweets. In late summer Felix signed on Bastians, who played for SC Freiburg and VfL Bochum, among others. And in winter the club surprised with Thomas Eisfeld. The 29-year-old playmaker was promoted to the Bundesliga with VfL Bochum, but has been looking for a new challenge ever since. Eisfeld, just so you can understand what kind of coup that is, was trained at Borussia Dortmund and Arsenal FC. That says it all.

Oguzhan Kefkir, that's another one who has seen a lot in football. The 30-year-old played a few times for VfL Bochum in the Bundesliga. But he too was amazed: "I've already had experience in the 3rd division and have celebrated promotion once. But what I've experienced and am experiencing here in Essen simply can't be compared to the promotion back then. It's a completely different world," he told Reviersport. After the game, when the fans stormed onto the pitch, "a lot of people cried and shed tears. That's when you noticed that it really affected them. You can see how important it is for people has here." Rot-Weiss, that is, sorry, was a giant, just too big for this league, which for years was only keen to beat the club. Like in the Bundesliga, where it's also about overthrowing FC Bayern. In Essen they don't like this comparison. In the future they will be outsiders again, not favorites.

With which squad do you compete in the 3rd division? What desires have the numerous top people around Heber, Young, Harenbrock and Niklas Tarnat aroused? That's not an issue for this holy Saturday evening, when the 14-year wait for the return to professional football ends so passionately, with the march of well over 3000 fans, from Oppa to Steppken, peacefully, loudly and brightly across the city was celebrated. Bye panic, dig in, pig league. 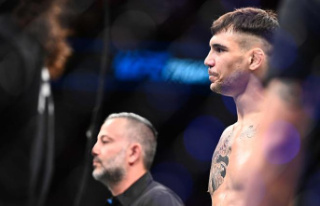