Up to 366 different agreements in the last 27 years. 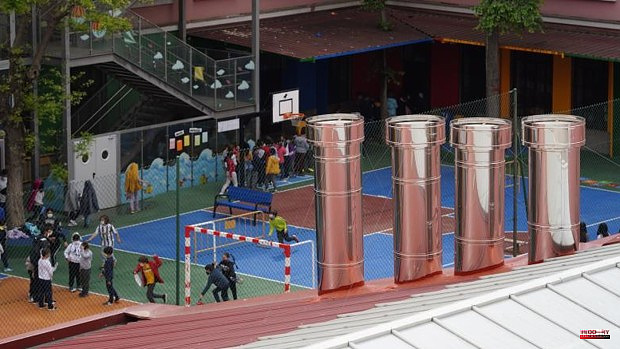 Up to 366 different agreements in the last 27 years. An urban gibberish that the Madrid City Council finalized this Monday in an extraordinary plenary session for the occasion. PP, Ciudadanos and Vox voted in favor of the modification of the General Urban Planning Plan (PGOU) designed in 1997, interpreted so many times by the monitoring commission and outdated for scenarios that have proliferated in recent years. Ghost kitchens, 'cohousing' and 'coliving', green building. The new framework, although it is not a complete review of the plan, an exercise that would take years, aims to "rewrite the urban planning of the city", guaranteed yesterday the delegate of the Urban Development Area, Mariano Fuentes (Cs).

The pandemic hit that the hotel industry suffered was the spur for the ghost kitchens (grouped, according to their technical name) that are hidden in the basement of buildings, many of them in residential areas.

Its regulation has precipitated the extraordinary plenary session that was held this Monday at the Palacio de Cibeles. Neighborhood complaints forced the city council to suspend the granting of licenses in August 2021 and, to avoid legal limbo, the Urban Development Area needed to pass the first step so that the two-month period of public information that follows the initial approval concluded before August 16, when the moratorium ends.

Problem solved. The new urban regulations come into force today with their publication in the BOAM (Official Gazette of the Madrid City Council), although the area expects that its final approval will be delayed until February or March 2023. Ghost kitchens are limited in residential areas to a maximum of eight per premises, which may not exceed 350 square meters in area, and with the loading and unloading area inside. "We also regulate storage with home delivery and logistics," added Fuentes.

“We have to establish new ways of living, not forcing people to live in a certain way”, the councilor began the sixth of the “seven levers”, in his words, that are the backbone of this urban modification. Anglicisms are incorporated into the standards. The 'coliving' as a new category of shared residential, an exclusive building that will serve as collective housing. The 'cohousing' is included within the residential use and allows to reduce the minimum size of the house in exchange for the same area in common area. This section also includes a post-pandemic lesson: "Terraces [and storage rooms] will not count for building purposes," Fuentes said. The new buildings will be built with more projections, flights, arcades, shopkeepers, balconies and balconies.

The city council will reward green facades and roofs and elements of sustainability and energy efficiency, such as solar panels, renewable energy production facilities, or bicycle storage rooms, considered sustainable mobility vehicles, with extra meters. "Whoever invests more in energy efficiency, in improving comfort and in improving facades, will have more incentives in terms of buildability and in terms of free occupation of plot space," said the delegate.

The new framework erases the cumbersome special urban environmental control plans. "This does not mean that we reduce environmental controls in any case," said Fuentes, but rather that the complicated administrative procedures will take 18 months less. To do this, the area replaces the Special Plan for Environmental Urban Control of Uses (Pecuau) with the Studies of Repercussion of Implementation of Uses (ERIU) which, beyond the new nomenclature, means including the conditions of the former in the latter.

A measure so that "any person, entrepreneur or investment that wants to establish a business is given certainty of when they will be able to open it," explained the mayor. The previous regulations required two procedures, that of the Pecuau and that of the license; now, only one, condensed in the same license. The term that could be extended up to three and a half years thus decreases to six months.

The city council has not touched the Special Lodging Plan approved by former mayor Manuela Carmena to stop the tourist flats that in recent years have caused neighborhood discontent. The measure requires all apartments dedicated to vacation rentals for more than 90 days to have an activity license for lodging, a permit that requires independent access from the street and that, in practice, leads to the illegality of 95% of these properties.

The Urban Development Area proposed to replace this clause by concentrating tourist housing on the ground and first floors. However, a territorial impact report from the Community of Madrid advises maintaining independent access to the Carmena plan that the courts endorsed. “It was decided not to touch that and not to put at risk the 366 articles that the norm modifies,” Fuentes explained, in statements to the media.

The ISO polygon, an amalgam of old industrial buildings converted into premises and homes in Carabanchel, will be able to continue its evolution without obstacles. Through the hybridization of uses, included in zonal rule 9, which regulates business activities and "is the rule of the future of Madrid," the delegate said on Monday. The city council modifies the percentages assigned to each use to allow "complementary and alternative uses to generate a greater opportunity and buildings with mixed uses can be generated," said Fuentes.

1 View Queen Elizabeth, Age 1, Side-by-Side With Her... 2 Watch Jake Gyllenhaal enter a strange world in the... 3 Luis Enrique's defensive problems: Spain's... 4 The inner journey of Cancook, the Michelin star from... 5 The Euribor breaks forecasts and already reaches 0.5% 6 Investment secrets so that inflation does not 'eat'... 7 Don Juan Carlos will not return to Spain next weekend 8 The crime of Esther López, doomed to file due to... 9 Feijóo will have seven minutes in front of Sánchez... 10 The war in Ukraine positively affects Latin American...