Gas contracts, the main issue in the visit of the emir of Qatar

The emir of Qatar, Tamim bin Hamad al Thani, and his wife, Sheikha Jawaher, will be received with military honors by the King and Queen on Tuesday morning at the Royal Palace in Madrid. 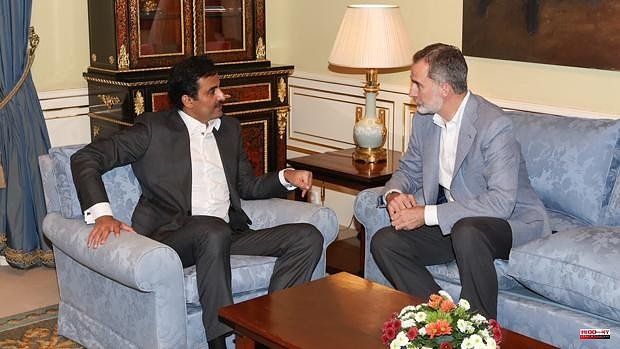 The emir of Qatar, Tamim bin Hamad al Thani, and his wife, Sheikha Jawaher, will be received with military honors by the King and Queen on Tuesday morning at the Royal Palace in Madrid. An official reception with which his state visit to Spain will begin.

Today's is Al Thani's first visit since he took office as president of Qatar in 2013. "Qatar and Spain have maintained relations of friendship and mutual trust for many years, and this visit will serve to strengthen collaboration between our two countries." », the Qatari ambassador to Spain, Abdalla Al-Hamar, explains to ABC, while adding that this visit «demonstrates the close historical collaboration between our two countries».

This visit will focus on strengthening bilateral cooperation and "on creating new opportunities and alliances, in addition to discussing regional issues of mutual interest."

In addition to strengthening bilateral relations, this trip has a high economic component. Tomorrow the emir will attend the Business Meeting organized by the CEOE, which will be accompanied by Felipe VI and the Prime Minister, Pedro Sánchez. In addition, in an energy context such as the current one -when the EU is looking for alternative sources of supply-, it is important to ensure the supply of natural gas by Qatar, since it has the third largest reserves in the world.

“This state visit, without a doubt, takes place in a complex international context. Qatar has already invested in expanding its gas production capacity in the coming years; however, it will take some time to increase the margin of production and distribution," says Ambassador Al-Hamar.

Given this scenario, according to Al-Hamar, Qatar "is working closely with its European counterparts to continue discussions on long-term liquefied natural gas (LNG) supply agreements and the development of associated import infrastructure."

The emir of Qatar and his wife will remain in Madrid for a little over 48 hours. With a travel agenda minuted to the second, this morning they have already woken up in Madrid. They set foot on Spanish soil yesterday afternoon, in two different planes that landed at the Adolfo Suárez Madrid-Barajas International Airport.

With a little more than two hours apart, the sheikh and the sheikha arrived with their respective delegations and were received by the Qatari ambassador, among other authorities. While the delegation is staying at the Four Seasons hotel in Madrid, they are at the Royal Palace of El Pardo, which these days will be the official residence of the sheikh and his wife during the two days of their visit. Felipe VI went there yesterday afternoon to welcome the emir of Qatar.

Once the reception with military honors this morning is over, the emir of Qatar is expected to travel to Madrid City Hall, where he will be welcomed by Mayor José Luis Martínez-Almeida, who will present him with the 'Golden Key ' of the Villa of Madrid. He will visit the Senate and the Congress of Deputies, where the respective medals will be awarded. Felipe VI will also give him the collar of the Order of Isabella the Catholic, the highest degree of a distinction instituted by Fernando VII in 1815 and dependent on the Ministry of Foreign Affairs.

At half past one, he will hold a meeting with Felipe VI at the Palacio de la Zarzuela, which will be joined half an hour later by Queen Letizia and the sheikha, for a lunch that will last until half past three in the afternoon. In the late afternoon, the emir of Qatar and his wife will return to the Royal Palace, where the Gala Dinner offered by the King and Queen will take place in his honor.

The official entourage of the sheikh and sheikha is made up of twelve people. Among them are the Minister of Foreign Affairs, Mohammed bin Abdulrahman, and the head of the Diwan Amiri -equivalent to the organization of the administration-, Saoud Bin Abdulrahman; in addition to the ministers of Finance, Energy Affairs and Trade and Industry. He is also the President of the Qatar Chamber of Commerce and the Chief of Staff of the Armed Forces.

All of them will supervise the nine agreements that Pedro Sánchez and Tamim bin Hamad al Thani are expected to sign tomorrow, after the working meeting that they will hold in La Moncloa and before the lunch that will end the state visit of the emir of Qatar. Agreements and memorandums between Qatar and Spain to promote cooperation in the economic and financial fields, as well as in educational, scientific, judicial, military and innovation matters. It will be here that two other important legs of the visit will enter: renewable energies to promote the green transition and the World Cup in Qatar, which will take place at the end of the year.

"Qatar has sustainable development at the forefront of its priorities and we continue to invest in ecological innovation and new technologies to protect our environment and prepare our economy for the future," says the Qatari ambassador.

Some synergies already exist here: “Qatar has an 8.57% investment in Iberdrola, which has its Innovation Center in Doha, and with whom we already have a long-term relationship. Qatar's interest in renewable energy is therefore very clear and we are aware of Spain's leadership in this sector."

Regarding football, according to the ambassador, the 2022 Qatar World Cup - where Spain "has played a very important role in its preparation" with the design of three of the eight stadiums where the tournament will be played - will be "a magnificent opportunity" to show "the extraordinary transformation" of the country in recent years.

1 The National Court tracks bites of more than one million... 2 Justice closes the tourist flats in Galicia 3 Still little diversity in the Canadian army, according... 4 Ceuta border workers: "Not even a bag of tomatoes... 5 The Biden Administration opens its hand with the Castro... 6 Internal offensive in the Treasury to activate the... 7 Auditor General's report: construction site management... 8 A long rest beneficial for the Avalanche 9 Yaroslav Askarov agrees with the Predators 10 Washington lifts a series of restrictions on Cuba 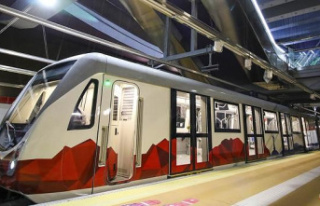 The National Court tracks bites of more than one million...