Galician beaches are left without lifeguards: "It is better to be a waiter"

Despite the fact that bad weather keeps the Galician beaches free of bathers these days, the start of the summer season will force the lifeguard service to start operating on July 1 in more than a hundred sandy areas. 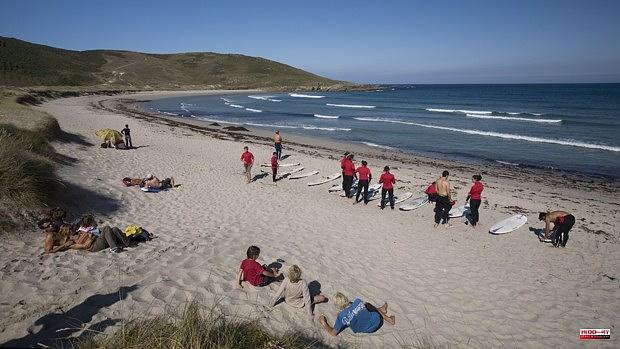 Despite the fact that bad weather keeps the Galician beaches free of bathers these days, the start of the summer season will force the lifeguard service to start operating on July 1 in more than a hundred sandy areas. These are the beaches distinguished with the blue flag, whose recognition implies that until the month of September they must have security guards at the foot of the sand at least eight hours a day, coinciding with the times of greatest influx. The councils are the ones that must guarantee that the number of lifeguards is sufficient to cover every day of the week in a schedule that usually extends from 12 to 8 p.m., but getting professionals is so complicated that some city councils admit that they have had to give up the flag because the bag of lifeguards is insufficient. The underlying problem in the Community of a thousand beaches lies, they accuse from the sector, in temporality and low salaries. Nor does it help that since 2012 lifeguards are required to take a course of more than 400 hours, which involves an outlay of about 1,300 euros, to obtain a certificate of professionalism.

Nuria Rodríguez, president of the Galician Rescue and First Aid Federation, sums it up, emphasizing that specific training of "five or six months of course" is required to "work two or three months a year", a dilemma before the one that many young people choose to "get into another profession, like that of waiter, which in the end is better".

The salary does not encourage applicants either, however vocational they may be, because without a specific labor agreement for beach lifeguards they are included in a more open one of aquatic facilities and gyms that contemplates a payroll of 1,260 euros gross per month. An amount that no longer mobilizes many students who completed their income for the year with the months they dedicated to ensuring the safety of bathers. "When we pay off the price of the course a little, it's after a month and a half or two months of summer, so many colleagues decide that it's not worth spending so many months of training and effort, no matter how much they like it," acknowledges Rodríguez, who It even reveals that there are subsidized courses that do not cover the places "because even then people do not want to dedicate more than 400 hours for a contract that hopefully will last three months."

The path chosen by many of the applicants complicates the organization of the coastal municipalities, which since April have been struggling to hire lifeguards to protect their sandbanks. The largest, such as Vigo, La Coruña or Sanxenxo, choose to outsource the service due to the enormous difficulties in covering a minimum workforce. In the case of Sanxenxo, the Spanish municipality with the most blue flags, it is the first summer with this new model and everything seems to be an advantage. “We have been dealing with this problem for years now. It was very difficult for us to sign people because between lifeguards and toilets we have to hire more than 80 people and also on some of our beaches we offer an extended surveillance service that begins in June and ends in mid-September »they explain to ABC from the council Pontevedra, who sought to "take a leap in professionalism" and save headaches. In addition, and with the death of a bather in Silgar last April still present, in Sanxenxo they have already placed a beacon 200 meters from the coast and swimming channels in Silgar to protect users, taking extreme security measures. In the case of Vigo, with eleven sandy areas to cover and a hundred places at stake, outsourcing has been the trend for the last ten years. Also in La Coruña, where the organizers acknowledge that this year "everything is already covered."

But the problem unleashed by the lack of security guards is still entrenched in most coastal municipalities, which are trying formulas to sign more and better lifeguards in the summer market, although without much success. "Some councils like Oleiros offered higher salaries, but not like that," explains the president of the Rescue Federation, who considers that one measure must go hand in hand with the other if the aim is to unclog the conflict in an effective and durable. They suffer directly in towns such as Vilagarcía, where after a first call they still have many vacancies. The council needs a dozen lifeguards, but assumes that, one more year, "we will not get them."

On the other side of the controversy, the lifeguards insist on working for more months. «What we have been asking for years is to increase the length of service to make this profession attractive, because this situation is leading to the fact that the best are not being chosen, but what is available. I remember being in courts in which 400 people applied for 75 seats and now there are calls for 75 seats to which 35 apply. That is what we are experiencing and we warned about it ten years ago, "laments Rodríguez. As a spokesman for the profession, he assumes that "the minimum for people to be encouraged would be to think of four or five months of work", a way that the hours of training pay off. He gives as an example the case of pool lifeguards, where there are more candidates because the training hours are fewer and because those who have Inef's Tafad can assume that responsibility directly, so "there are always more applicants for this type of facilities”.

With most of the beaches without a surveillance service, from the guild they warn that "this summer there will be no lifeguards despite the fact that there are beaches in the north that are very dangerous and that they will be left without surveillance." Given the scenario that opens, encouraged by the good data on tourist influx, the sector delves into better conditions and greater regulation. They complain that in a swimming pool there will always be an inspection, but on a beach, no matter how big or crowded it is, no. "The lifeguards are not an obligatory figure nor do they have to have any specific material" they reveal a few days before the summer season begins with hardly any red swimsuits controlling from the sand and with many deserted watchtowers.

1 Some 'breath' for the volcano: Sánchez... 2 Jurists convene this Wednesday a concentration to... 3 Loquillo comes out in Toledo through the big door 4 The president of the Ecuadorian Parliament calls for... 5 Gunnar Biniasch one step away from being crowned champion... 6 The "Urbania" begins the long regatta with... 7 “Quantum” achieved his fourth Rolex TP52 World... 8 Irene de Tomás, European champion of ILCA 4 9 Bale finds a team in the United States 10 Sánchez blames "the mafias" for the assault... 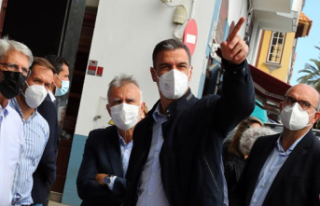 Some 'breath' for the volcano: Sánchez...