In the thirteenth stage of this Giro d'Italia, Frenchman Arnaud Demare (Groupama) triumphed after a comeback completed in the last meters. 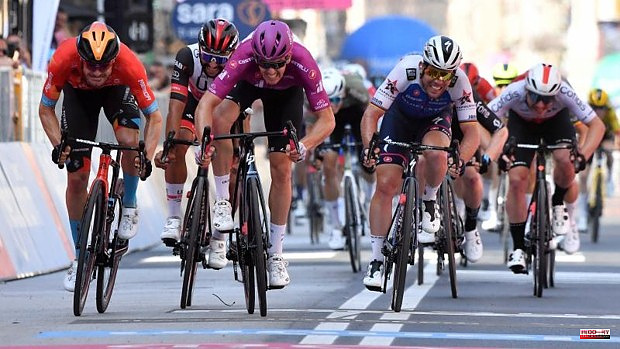 In the thirteenth stage of this Giro d'Italia, Frenchman Arnaud Demare (Groupama) triumphed after a comeback completed in the last meters. The intense team work helped the alpine to obtain his third victory of this Giro. The sprinter finished exhausted a race that gave him the chance to retain the 'ciclamino jersey' of the points classification.

The first part of the race ran the 'Classicissima de Primavera' in reverse, one last chance for the sprinters to win a stage in this Giro, before the demanding weekend in Piedmont begins.

The leader of the general classification, Juanpe López, had the obligation to retain the 'pink jersey' and he did so by managing the pace throughout the route thanks to the joint work of the Trek team.

The first part of the day began with the sprinters ready to attack and at kilometer 10 the first attempt of five runners who managed to distance themselves from the peloton was already seen. Maestri, Eenkhoorn, Prodhomme, Tagliani and Van Der Berg took a 3'20'' lead from the main group who decided to patiently manage the race.

There was no shortage of surprises on this 150km 'transition' stage: DSM's Romain Bardet withdrew due to stomach problems at the foot of Nava Hill. The Frenchman was fourth overall, 14 seconds behind the leader and two seconds behind Carapaz and Almeida. The alpine cyclist was a serious candidate for the final title and with his abandonment the possibility of a Frenchman winning the Giro d'Italia was extinguished, something that has not happened since 1989 with the victory of Laurent Fignon.

In the hardest part of the stage, during the Nava climb, the leading riders increased the lead to almost 5 minutes. Once the obstacle was overcome, the distances narrowed, with Tagliani moving away from the fugitives and the group approaching 2'35''. The pace of the peloton increased little by little as the final objective approached, at the entrance to Cuneo, to avoid the success of the breakaway started at the beginning of the race. Despite the efforts of the four sprinters, the group managed to recover the distance and obtain the possibility of fighting each other for the victory of the stage.

The end was all a storm of emotions. The group caught up with the four who couldn't resist the peloton that arrived with a different speed, creating a final sprint in which everyone could have won. Frenchman Demare managed to cross the line first, ahead of Phil Bauhaus and Mark Cavendish.

Juanpe López continues to lead for the tenth consecutive day, maintaining his advantage. From the next stage the conditions will change and the decisive part of this Giro d'Italia will be entered, where the Andalusian will have to defend his leadership.

1 Italy presents a peace plan for Ukraine to the UN,... 2 Macron announces his new Government with a significant... 3 Indra maintains its governance structure for its shareholders'... 4 New government: these ministers who are running for... 5 CNESST: drop to a historic level in the contribution... 6 Meliá exceeds 2019 reservations on the coast, but... 7 Brazil: Elon Musk launches an “environmental monitoring”... 8 Justice agrees with the CCAA, except Castilla y León,... 9 Macron appoints a new government, an ambassador for... 10 Stranger Things: the first 8 minutes of season 4 revealed 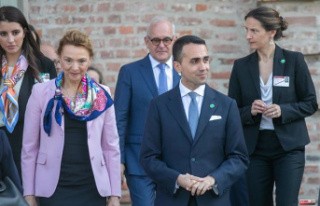 Italy presents a peace plan for Ukraine to the UN,...