Foreigners in their own city

For more than 40 years, José Cuenda Guerrero, 'el Pepe', used to go down by bus from the high streets of the Horta neighborhood to the La Boquería market. 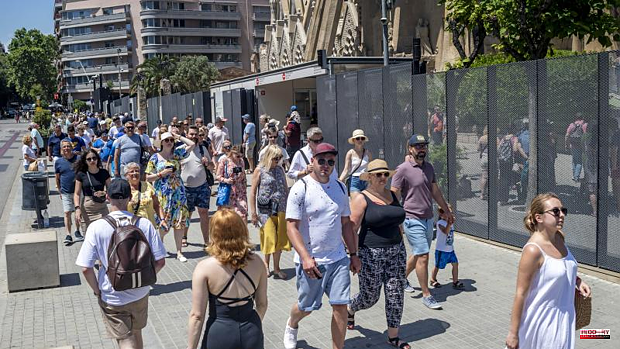 For more than 40 years, José Cuenda Guerrero, 'el Pepe', used to go down by bus from the high streets of the Horta neighborhood to the La Boquería market. He bought a spider crab and enjoyed a pleasant walk in the company of his wife. During the last years of his life and due to the massive influx of foreigners he stopped doing it. He took refuge in his neighborhood and never returned to Las Ramblas. Unfortunately, Pepe passed away during the pandemic. A time when the citizens of Barcelona 'recovered' the center of their city. Today, reality is back to what it was before. The health crisis seems like a thing of the past, the number of tourists is similar to that of 2019 and the contrast with the last two years makes it feel much higher.

"It's the last day I come," says María Jesús Estruch, a resident of Raval. At 69 years old, she makes her way with the car in the corridors of La Boquería. This central market welcomes tens of thousands of tourists daily who come for its historical interest and its gastronomy. "The worst thing is that only visitor-oriented products are sold," she laments, "there is no normal food left." In the posts they assure that there is no alternative, that the national client is an endangered species. Gemma Pujol, a butcher, explains that most of her clientele are tourists who come in large groups, that she does not know to what extent they are guided or not.

In the Sagrada Familia, the situation is not very different. In the immediate vicinity of the temple, a staggering number of tourists walk behind a man holding an umbrella. It is a 'free tour' that brings together several dozen people. Neighborhood residents tend to avoid the area at rush hour because the crowds can be overwhelming. Javier Murguía, a resident of Valencia Street, clarifies that these groups are very annoying to him and that, on occasions, he has been forced to elbow his way through because they block access to the metro. "I think it's a shame that anyone can guide such a large group and explain anything about the city to them in an irregular way," he says, saying that he is in favor of tourism but in a "controlled way."

From the Association of Tourist Guides of Catalonia (Aguicat) they believe that it is necessary to distinguish between the different types of visitor. Macarena Bergada, president of the association, explains to ABC that in recent years they have fought against 'bad practices' in the sector. “If we are permissive with activities that are not regulated and are not legal, the image we give of our city is a decadent image”, she affirms and defends that “illegal tours must disappear”.

To combat this type of irregular business, Aguicat itself signed a decalogue of good practices with the Barcelona City Council and the Professional Association of Tourist Guides (APIT) in which they undertook, among other things, to limit the size of the groups to a maximum of 30 people. In the case of Ciutat Vella, the most visited district, the restrictions are to a quota of 15 visitors per guide. "We know that this will not stop those who commit crimes," says Bergada. "We are only interested in quality tourism and this is a good way of committing ourselves to the city of Barcelona," she clarifies.

The decalogue includes measures such as the prohibition of loudspeakers on tours, the limit of access to the markets of La Boquería or San Antonio (also 15) and the explicit prohibition of capturing people on public roads. The city council seeks to encourage scheduled visits and for the guides to find spacious locations to stop and make their explanations. The pact is signed in the midst of a wave of measures against mass tourism. This summer the government of Ada Colau is planning a major offensive against pedicabs, which carry out an activity that harms other sectors. The Urban Guard will sanction these vehicles without a license.

Other open fronts of the consistory are the tourist flats without a license and the massive arrival of cruise ships, which dock for one or two days in the Catalan capital and release thousands of tourists towards Las Ramblas and the port area. In this regard, the city council has spent years trying to prioritize those that dock for several days in the Catalan capital, and redirect passenger traffic to less crowded places.

One of Aguicat's proposals to reduce traffic in the downtown area and redirect visitors to less valued areas "but with a lot of potential" is to increase the number of bus parking spaces. Bergada explains that there are places that are "a real wonder", such as the Pedralbes Monastery, but that it is impossible to travel with a group of 15 or 30 people because there are no places to park. Measures like this would rid Ciutat Vella of so many foreigners that "sometimes they are just passing through, not even visiting anything."

1 A group of teachers and professors decide to organize... 2 Alejandro Chicharro cuts the only ear in the semifinal... 3 The PP will seek a new fracture of the Government... 4 This is the plane that transports 'The Beast'... 5 Biden's 'Air Force One', the most recognizable... 6 Innovative entrepreneurship shakes off the fear of... 7 Textile sales, in tension due to inflation and the... 8 A huge security and logistics device travels with... 9 'The Beast', Biden's armored limousine... 10 The Mobile World Congress will continue in Barcelona... 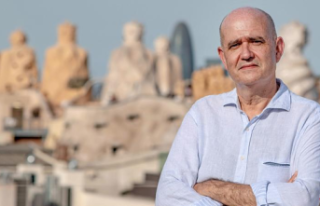 A group of teachers and professors decide to organize...