Niclas Füllkrug first got thanks from his teammates, then the goal saver also received a warm hug from national coach Hansi Flick. 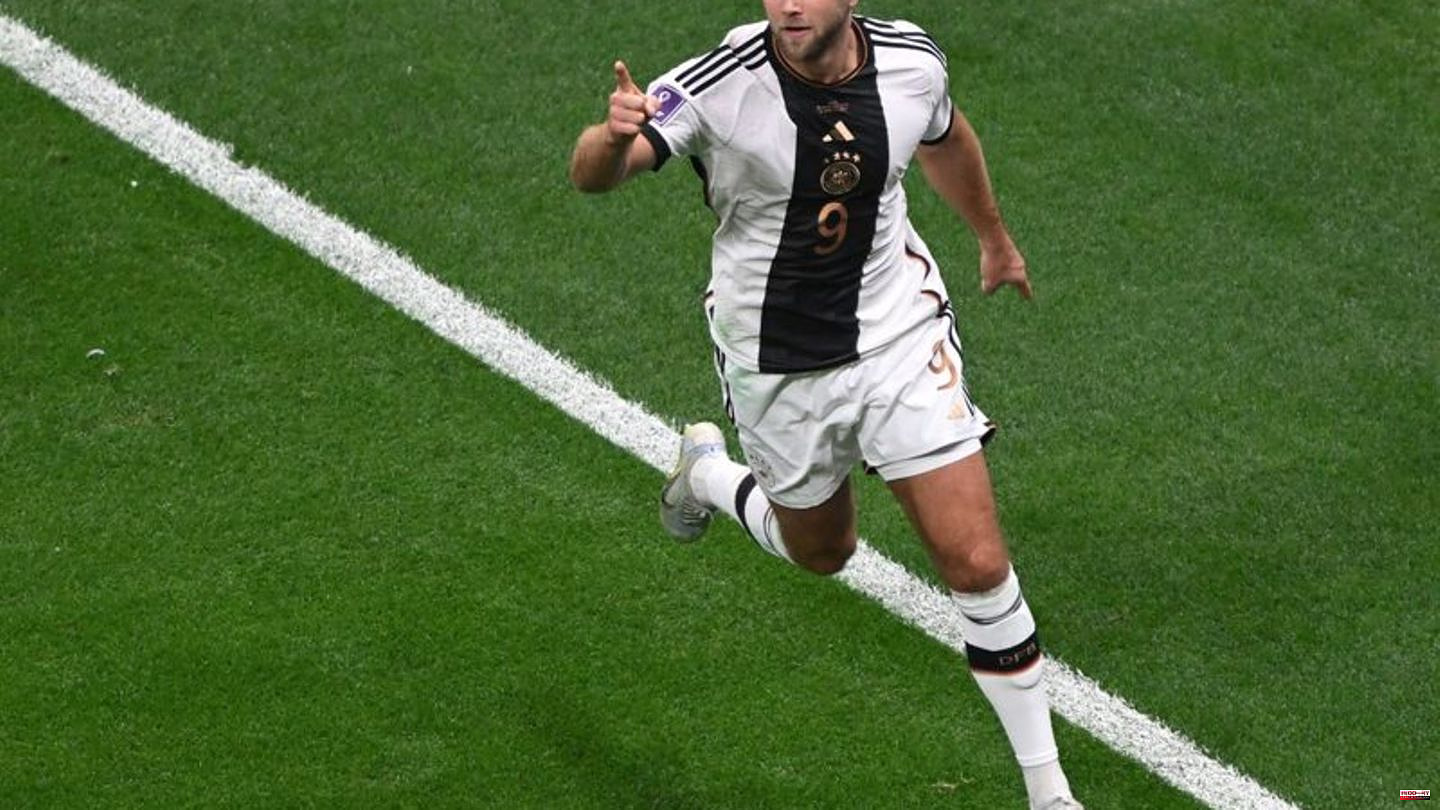 Niclas Füllkrug first got thanks from his teammates, then the goal saver also received a warm hug from national coach Hansi Flick. With his late equalizer to 1: 1 (0: 0) against the big feared opponent Spain, the super joker saved the German national soccer team from a second World Cup setback.

With the goal in the 83rd minute, the DFB-Elf just passed the character test. With combined forces, the DFB selection wrestled their bogeyman after Álvaro Morata's goal (62nd) to make it 1-1 (0-0).

"The team fought unconditionally, so you just have to say: compliments to the team. We've only taken one step, we still have to take the next step against Costa Rica," said Flick on ZDF and praised the goal scorer Füllkrug. "He does that very well. The determination with which he pulls away has done us good."

But the shaking is far from over for Flick. After the hard-earned draw at the Bedouin stadium in Al-Khour, a first win in Qatar is essential for a place in the round of 16 against Costa Rica on Thursday. Otherwise the embarrassing second World Cup knockout in the group phase for the four-time champion but still bitter reality.

"We really wanted to draw this game," said Füllkrug. "We still have room to improve. We now have the opportunity to go through to the next round. We don't need to freak out now, it's still 1-1 and not a win." Thomas Müller enthused about the 29-year-old's "incredible goal": "He came in great, that's what he's in for. Of course he's already announced that in the last few days." Captain Manuel Neuer summarized the quintessence of the evening: "The important thing is: We're still alive."

With just one point, Germany is still last in Group E after the worst start in long World Cup history. With the unexpected help of Costa Rica's win against Japan a few hours before the intense showdown of the ex-world champions, the DFB-Elf has their tournament destiny back in their own hands despite the 1-2 draw against Japan - even if Spain has been for 34 years was simply unbeatable in a competitive match.

For a long time it was clear to the teams what was at stake for them - the Spaniards should have planned for the round of 16 with a second victory after the 7-0 offensive whirlwind against Costa Rica thanks to an outstanding goal difference. However, Werder Bremen striker Füllkrug continued his incredible story in only his third international match with the second goal in the national jersey.

At the beginning, neither team wanted to take any risks, tactics were trumps, the build-up game consisted of a lot of scanning and waiting on both sides. The Spaniards' first and for a long time only big chance was thwarted by Neuer with a somewhat unconventional save against Dani Olmo. The German captain deflected the shot from Leipzig to the crossbar with his right hand (7th). The 36-year-old Neuer played his 18th World Cup game and drew level with the record holders Sepp Maier and Claudio Taffarel from Brazil as a goalkeeper.

The Spaniards kept flashing their playful class with fine ball acceptance. In order to "close" the center and prevent the Iberians from combining, Flick had put Leon Goretzka, who had been substituted on against Japan, next to his Bayern team-mate Joshua Kimmich in defensive midfield. With his physique, Goretzka showed the qualities hoped for by the national coach, repeatedly disrupting the Spanish game structure. Ilkay Gündogan moved up a position centrally, but was unable to develop compared to his performance with a penalty goal against Japan.

The center remained tight defensively, but Flick's plan didn't work offensively at first. Müller was out and about a lot in the striker, but had little influence on the game. Youngster Jamal Musiala had no effect on the left attacking side and complained several times.

At least through standards and after winning the ball themselves, the German team occasionally developed danger. With expansive steps, Goretzka bridged the midfield after Gündogan put the ball on him. However, the pass to Serge Gnabry came too late - offside (10th). Bayern right winger's shot from the edge of the area went wide of Unai Simón's far post in the middle of the first half (24').

Shortly before the break, the German team celebrated the supposed lead. Defense chief Antonio Rüdiger was clearly offside before his powerful header, as the video review revealed (40'). The Real Madrid defender's attempt from a tight angle five minutes later was easily thwarted by Simon.

In addition to Rüdiger, Niklas Süle was allowed to play his favorite position in the center again after his failed appearance as right-back against Japan. And there the Dortmunder felt visibly more comfortable, acted present up to the deficit. In the backward movement, however, David Raum had several problems on the left side of defence. But after Neuer revealed unusual weaknesses with his foot in a bad pass, the Leipziger saved his keeper by disrupting Ferran Torres decisively (26th).

The German team appeared concentrated overall. Before the eyes of DFB President Bernd Neuendorf, who took a seat two places next to FIFA boss Gianni Infantino in the honorary stand, the Flick selection initially put aside the fear of another setback in the second half. Kimmich conquered the ball with a tackle in the opposing penalty area, Gündogan put it back across, but Simón deflected Kimmich's shot to the corner (56th).

Sweeper too far away

But Spain always remained dangerous - and shocked the German team. Thilo Kehrer, who started for Nico Schlotterbeck, was too far from Jordi Alba at right-back. The low cross from the FC Barcelona professional was used by Morata, who was a step faster than Süle.

The gap was a short impact hit for the German team. Shortly after the Spaniards took the lead, Marco Asensio fired a free-standing shot from 16 meters over Neuer's goal. Flick brought Füllkrug and the recovered Leroy Sané to the offensive - this time the changes were right. The Bayern offensive star staged his Bayern teammate Musiala. With an ill-considered shot, the 19-year-old failed at Simon (73rd) instead of crossing to Füllkrug. As against Japan, there was still a lack of offensive efficiency.

But Füllkrug ended the goallessness. Sané used Musiala, who forwarded it with great ball handling, which Bremer completed. With the hard-fought point win, anything is possible again. 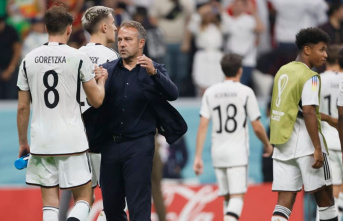