Five possible scenarios and more than 200 people, in the disaster drill at the Cuenca Cathedral

The General Directorate of Citizen Protection of Castilla-La Mancha, in collaboration with the City Council of Cuenca and the Bishopric of the province, have carried out a disaster drill on Wednesday morning both in the Cathedral and in its architectural and natural environment, with the objective of having the machinery "well oiled" in the event that these catastrophes occur in reality and thus "being prepared". 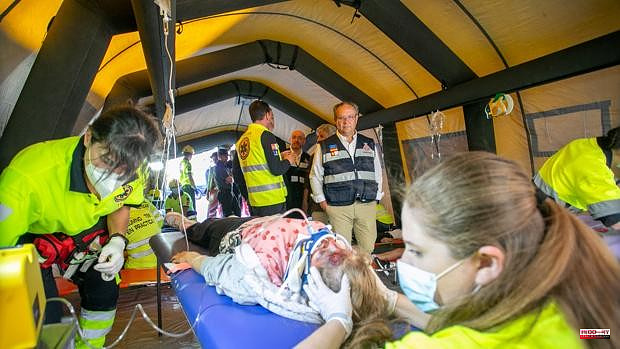 The General Directorate of Citizen Protection of Castilla-La Mancha, in collaboration with the City Council of Cuenca and the Bishopric of the province, have carried out a disaster drill on Wednesday morning both in the Cathedral and in its architectural and natural environment, with the objective of having the machinery "well oiled" in the event that these catastrophes occur in reality and thus "being prepared".

For this, five possible scenarios have been established that could occur and more than 200 people have been mobilized among members of the Fire Department, National Police, Local Police, Civil Protection, Civil Guard, Infocam, Sescam or Red Cross, among other bodies.

Minutes before 10:00 a.m., this drill began with the arrival of the first firefighters from the Cuenca municipal park, as well as the first members of the Civil Guard, National Police and Local Police, who have cut off access to the Old Town of the capital. They have cordoned off the area around the Cathedral and the Plaza Mayor and have placed fences around the square so that pedestrians cannot access the road areas and thus facilitate vehicle traffic.

In the same way, a 112 command post has been installed right in front of the Seo Cuenca where a Sescam field hospital has also been deployed and drones have been flown to control a hypothetical fire.

At the same time, Infocam firefighting agents have been deployed on the slopes of the Hoz de Huécar to control a possible vegetation fire, and another Red Cross tent has been re-installed in the Plaza de San Pedro to also make a first triage of the possible wounded and that they receive the attention they need.

Likewise, on one side of the Cathedral another tent has been installed to where the firemen were removing art elements from the temple, where they were packed and guarded to prevent them from also suffering damage in the event of a fire or collapse.

This drill, both fire and collapse, has been prolonged until around 12:00 when it has been concluded and normality has begun to be restored in the area of ​​the Old Town.

The Minister of Finance and Public Administrations, Juan Alfonso Ruiz Molina, has specified that this drill is about a fire in the Cathedral of Cuenca, which, in addition, has an impact on the historical and natural environment of this city, a World Heritage Site, and has highlighted the importance of this exercise to rehearse the implementation of the Territorial Plan for Emergencies of Castilla-La Mancha (Platecam).

Likewise, he has indicated that it serves to examine how the set of intervention groups is prepared in the field of emergencies and to make a subsequent self-assessment, in order to make corrections "so that, if a real event were to occur, we are prepared", has nuanced

Ruiz Molina has pointed out that the objectives of this drill are two: on the one hand, to have the machinery "oiled" in case an event of these characteristics occurs -as happened at the Cathedral of Notre Dame in 2019- and, on the other, « communicate to society that from public administrations we are prepared to deal with these emergency situations.

The Bishop of the Diocese of Cuenca, José María Yanguas, thanked the regional government for this drill because "everything that is done to protect and preserve this heritage is worthy of thanks."

In this sense, Monsignor has expressed confidence that this type of drills will spread throughout the region and to other emblematic places in the community "because the ultimate goal of the administrations has to be to preserve the heritage, artistic and documentary riches of the community".

Finally, Yanguas hopes that this action will remain just a drill and never become a reality, "but just in case, you always have to be prepared."

The mayor of Cuenca, Darío Dolz, has also thanked the Ministry for carrying out this drill, because it is always necessary "to have all the teams that have to intervene in a catastrophe prepared and trained to protect the best heritage asset that Cuenca has" .

The Cathedral of Cuenca has been the main protagonist of this emergency drill. The exercise has consisted of a fire started in the temple bathrooms, which evolves and spreads to the vicinity of the cathedral archive, threatening valuable documents and works of art, and causing the collapse of part of the roof near the aforementioned archive, which leaves several people trapped in the rubble.

The aforementioned fire, after spreading through the Cathedral, spread to the outside of the temple and caught fire in the vegetation of the Hoz del Huécar. The flames are evolving in the direction of the Castle. To deal with the events, the emergency management carries out an analysis of the situation in the coordination vehicle, which operates as an Advanced Command Post, and activates the Territorial Emergency Plan of Castilla-La Mancha (Platecam), in emergency phase level 1.

The situation also makes it necessary to set up a field hospital to triage the wounded and to set up a Red Cross shelter in San Pedro Square to care for the clients and staff of Posada San José, who have been evacuated from the building to be affected by the fire.

The head of the Treasury and Public Administrations has stressed that this is the first drill organized by the regional government in a heritage asset of these characteristics, the second carried out in Castilla-La Mancha this year since 112, and number 26 since 2016.

In addition, in the last six years, the Emergency Service has participated in more than 800 drills organized by other organizations and institutions and since 2015 the different emergency plans have been activated on 33 occasions, as happened with the Filomena storm, which involved mobilizing more than 13,000 personnel among all administrations and more than 1,700 material resources.

Drills are a fundamental tool to exercise preventive and emergency action systems, essential to guarantee the safety of people, goods and the environment in a situation of this type.

1 A "great procession" with twenty steps,... 2 The European Parliament sees problems in the credentials... 3 Legislative: LREM candidate Jérôme Peyrat announces... 4 The women's and men's soccer teams of the... 5 Italy celebrates its first victory with Dainese 6 Brussels proposes 9,000 million in macro-financial... 7 The United Kingdom denies that the problems with the... 8 Siemens Gamesa rises by 12.6% on the stock market... 9 The inflationary spiral triggers the sales of the... 10 Sports betting: The Eastern final awaits the Hurricanes 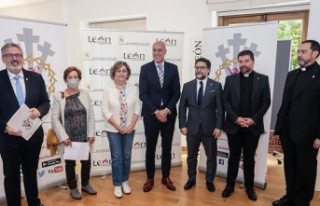 A "great procession" with twenty steps,...