Final sprint in the election campaign: candidates in NRW fight for every vote

It will be tight in the state elections in North Rhine-Westphalia. 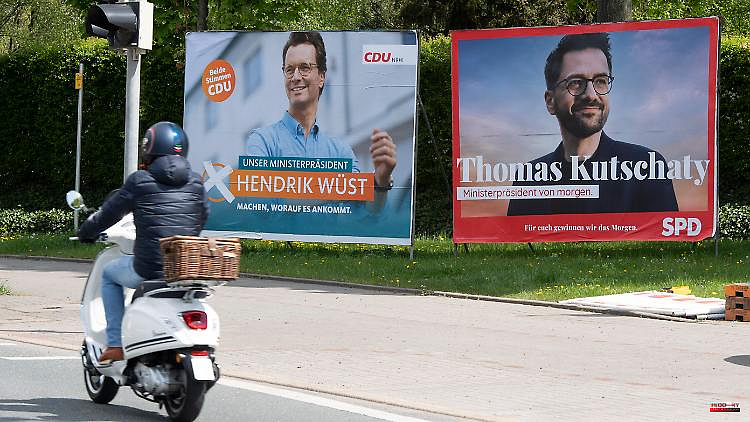 It will be tight in the state elections in North Rhine-Westphalia. The CDU and SPD are very close to each other in the polls. One day before the election, the top candidates Wüst and Kuchaty are campaigning on the streets and doorsteps. Every vote counts.

One day before the state elections in North Rhine-Westphalia, the parties are again campaigning for every vote. After the CDU, SPD and Greens held their central final rallies on Friday, federal and state celebrities will come to the final in Düsseldorf for the FDP on Saturday (from 5 p.m.). Top representatives of the CDU and Greens once again spread optimism in interviews in the morning shortly before the likely tight decision.

In North Rhine-Westphalia, the CDU and SPD are in a close race in the polls - with a slight lead for the Christian Democrats. CDU Prime Minister Hendrik Wüst and his SPD challenger Thomas Kutschaty once again campaigned in the streets shortly before the end. Kuschaty campaigned for votes in Essen, Düsseldorf and Gelsenkirchen. CDU top candidate Wüst traveled to the doorstep election campaign in Lübbecke in East Westphalia, as well as to Bad Salzuflen, Wiedenbrück and Lippstadt. In the afternoon, Federal Finance Minister Christian Lindner and the deputy Prime Minister of North Rhine-Westphalia and FDP top candidate Joachim Stamp wanted to campaign for votes in the state capital of North Rhine-Westphalia.

On Friday, the CDU, SPD and Greens held their final rallies with many prominent politicians. In Altenberge in Münsterland, Wüst emphasized the importance of stable political conditions in order to "be able to do what is important" - that is the election campaign slogan of the North Rhine-Westphalia CDU. Wüst received support from Schleswig-Holstein's Prime Minister Daniel Günther, who won the state elections last Sunday by a wide margin.

The CDU federal chairman Friedrich Merz said on WDR: "I am very, very confident that we will win this state election in the sense of: We will remain the strongest parliamentary group in the North Rhine-Westphalian state parliament and will also be given the task of forming the state government. " The co-chairman of the Greens, Ricarda Lang, also contradicted this on WDR: "You can tell that many people are in a mood for change. We are optimistic about tomorrow."

Chancellor Olaf Scholz appeared for the SPD in Cologne next to the cathedral and campaigned for the SPD's top candidate, Kuchaty. At rallies in Düsseldorf and Cologne, Federal Minister of Economics Robert Habeck backed the Greens' top candidate Mona Neubaur.

In several surveys, a tight race between the CDU and SPD has recently emerged. With around 30 to 32 percent, the CDU was only just ahead of the SPD with 28 to 29 percent. According to polls, the CDU/FDP coalition that has been in office since 2017 no longer has a majority. The outcome of the election and possible future coalitions are considered completely open. Around 13 million people are entitled to vote on Sunday in the most populous federal state.

The Greens are in polls at 16 to 18 percent and could achieve their best state election result. The FDP, which had become the third strongest force in 2017 with 12.6 percent, could only count on 7 to 8 percent. The AfD is 6 to 8 percent. With around 3 to 4 percent, the left would again miss entering the state parliament.

There could be several options for the next state government. According to surveys, in addition to a rather unpopular grand coalition of CDU and SPD, a black-green alliance or a Jamaica alliance of CDU, Greens and FDP would be possible. The SPD could also form a traffic light coalition with the Greens and FDP, as in the federal government. For a red-green majority, it is also just enough in some polls. "For me it is important that there can be no coalition without the Greens," said Green leader Lang in the WDR interview.

Even more than the elections in Saarland in March and in Schleswig-Holstein last Sunday, the vote in North Rhine-Westphalia, also known as the "small federal election", is of national political importance. It is considered the most important mood test for the federal parties and the traffic light coalition in Berlin. Wüst only succeeded Armin Laschet, who failed as a candidate for Union Chancellor in the federal election, as head of government in NRW at the end of October 2021. 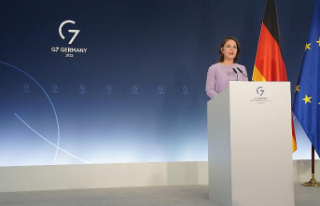 For fight against Russia: G7 want to supply Ukraine...