Alberto Núñez Feijóo was surprised that Pedro Sánchez threw it in his face, in the debate they held in the Senate last Tuesday, that he did not want to reform article 49 of the Constitution, to replace the term 'disabled' with 'disabled '. 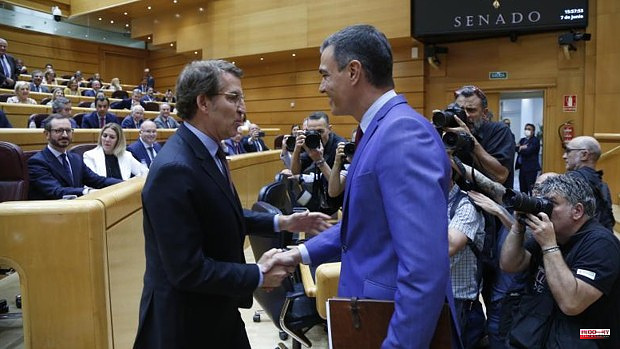 Alberto Núñez Feijóo was surprised that Pedro Sánchez threw it in his face, in the debate they held in the Senate last Tuesday, that he did not want to reform article 49 of the Constitution, to replace the term 'disabled' with 'disabled '. In Feijóo's team they listened to Sánchez with "stupefaction and indignation", as they commented to ABC: "But if at the meeting in La Moncloa in April he already told him that he did want to do it," they comment with surprise. The reality is that Sánchez used it as a throwing weapon against Feijóo, along with everything else he found at hand, in his first parliamentary face-to-face, and the opposition leader took good note.

Two days later, on Thursday morning, Feijóo met with the Spanish Committee of Representatives of People with Disabilities (Cermi), at the headquarters of this organization in Madrid, and at the end of the meeting he reconfirmed his full willingness to seal a pact with the Government to reform the Constitution in a quick, timely and exclusive way in its article 49, and eliminate once and for all the term 'disabled'.

The leader of the PP was blunt and very clear in expressing his full willingness to close an agreement with the PSOE as soon as possible: "We have no doubt about this constitutional reform, it is timely, it is appropriate and it is justified and we must do it." Of course, he put several conditions. The first, that if the Constitution is touched, it is only to make that modification, and nothing else. "The rest is not touched", nor to suppress the preference of men over women in the succession of the Crown, the popular insist, who want to avoid at all costs that a specific change in the Magna Carta could serve the independence groups and left-wing extremists to call into question the entire text, or fundamental parts of it, as the backbone on which our political system rests.

Feijóo's second condition is that there should be no referendum. The PP believes that the 'enemies' of the Constitution would use it to question the law of laws. The Magna Carta provides that, once the reform has been approved by the Cortes Generales, "it will be submitted to a referendum for its ratification when so requested, within fifteen days of its approval, a tenth of the members of any of the the cameras". In other words, 35 deputies would suffice, and with the current fragmentation of Congress it is very easy for that minimum to be reached, beyond the big national parties.

The third condition is that the modification of article 49 must have a favorable opinion from the Council of State, something that did not happen with the project that came out unilaterally from the Council of Ministers last year, and that the advisory body considered "disturbing" , not because of the underlying issue, which he sees as positive, but rather because he considers that the text sent by La Moncloa went far beyond changing a term and contained "pernicious, idle, inconvenient" aspects that generated constitutional problems.

Behind these precautions there is a total distrust of the PP towards the tortious use that could be made from the left and the nationalists in the face of any constitutional reform. Feijóo's PP "totally" shares the fear and distrust expressed in its day by the leadership headed by Pablo Casado, who flatly refused any modification of the Magna Carta. The previous PP team agreed to remove the word 'disabled' from the Constitution, but believed that it was not the time to open the 'melon' of the Magna Carta, not even to touch a single article. Thus, he remained firm in his idea of ​​opposing any reform, as Rajoy also did at the time.

Feijóo has rectified that iron stance and opens himself to an express pact between the two major national parties, as happened in 2011, when article 135 was modified, with the socialist government in power. The idea of ​​​​the president of the PP is to sit at the same table with his party, the PSOE and representatives of Cermi, to agree on the change of the constitutional text. Once an agreement was reached between them, they would extend it to the rest of the parliamentary groups and seek an express commitment that a referendum would not be called nor would the debate extend to other articles of the Magna Carta.

1 Calviño does not respond to the PP for the files... 2 Moncloa gives margin to the PP in the renewal of the... 3 Clara Gutiérrez: «Last year alone, 100,000 million... 4 Viñedos de Álava, the project that threatens to... 5 A victim of an abusive facility seeks out her Korean... 6 Former president of Bolivia sentenced to 10 Years... 7 US: China's military activities around Taiwan... 8 NBA Finals: An unstoppable Curry ties the series between... 9 UK military: Russia uses anti-ship missiles against... 10 The booths of the Madrid Book Fair will close this... 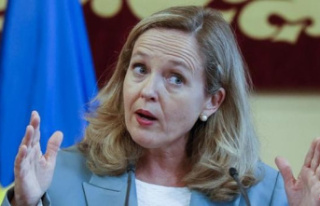 Calviño does not respond to the PP for the files...