The winning painting of the II National Painting Contest '3V' convened by Miguel Esteban's 'San Isidro' cooperative, chosen among 130 works presented, has been 'Between drinks', by the artist Nuria Parra Cátedra, which has received an award from 3,000 euros and whose painting will be reflected in the labels of the bottles of red wine '3V' of the next vintage. 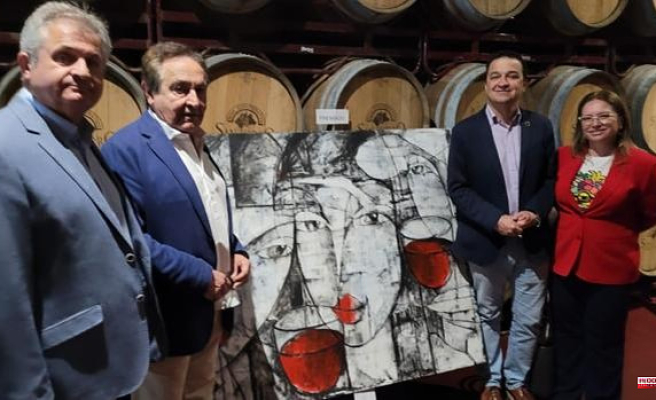 The winning painting of the II National Painting Contest '3V' convened by Miguel Esteban's 'San Isidro' cooperative, chosen among 130 works presented, has been 'Between drinks', by the artist Nuria Parra Cátedra, which has received an award from 3,000 euros and whose painting will be reflected in the labels of the bottles of red wine '3V' of the next vintage. The jury has decided to award two honorable mentions, one for the work 'Uvas', by Mercedes Escauriaza, and another for 'Vinum', by Enrique Mestre Jaime.

The 'San Isidro' cooperative, also known as Bodegas Lairén, dates back to 1911, when the first group of farmers emerged in the municipality. It is currently made up of nearly 1,500 members, has some 11,000 hectares of vineyards and has a crushing capacity of 40 million kilos of grapes.

Between 60 and 70 percent of the wine they produce is exported to countries around the world.

Members, managers, farmers and neighbors in general have gathered this Saturday at the 'San Isidro' wine cooperative to participate in the VII Open Doors Day organized by the entity and attend the awards ceremony of the II National Painting Contest ' 3 V'.

The mayor of Miguel Esteban, Pedro Casas, has participated in this event held on the eve of the festivity of San Isidro, patron saint of farmers, and highlighted "the undeniable importance of a sector that, despite the many difficulties it faces every year, after year, he continues at the foot of the canyon and is an example for everyone ».

The event was also attended by the Minister of Agriculture, Water and Rural Development, Francisco Martínez Arroyo; the president of the 'San Isidro' cooperative, Tomás Martínez; its manager, Jesús Navarro, and other members of the board of directors.

Casas has demanded more aid for farmers, whom he has described as "genuine heroes, because currently it is not easy to dedicate oneself to agriculture, it is not easy to face the very high costs of diesel or energy, nor are the prices that our farmers receive for the sale of products in which they have put their soul, in addition to the effort and economic investment", he said.

For his part, Martínez Arroyo has announced that the Government of Castilla-La Mancha is going to allocate 26 million euros from next year to protect the rainfed vineyard through a new agri-environmental measure. The Minister of Agriculture explained that "the rainfed vineyard is the essence of our land and from 2023, it will receive aid of one hundred euros per hectare." Martínez Arroyo has pointed out that this vineyard is "very important" in the Miguel Esteban area, "where there is a problem in access to water, water is the limiting factor", he lamented.

"We work to make wine better every day," said the minister, "because we want it to continue allowing 80,000 families to continue living from this activity in Castilla-La Mancha." In addition, he has demanded that wine from the region be chosen and consumed because "we always have to defend it." In particular, he has highlighted that of the appellations of origin, which bear the name of Castilla-La Mancha and which can now be differentiated in distribution thanks to the 'Campo y Alma' quality mark.

1 Al Jazeera journalist shot in the head in Israeli... 2 2022 work calendar in Valencia: when are the next... 3 Russia takes aim at Odessa 4 Titirimundi returns to the stage despite the rain 5 The abortion veto would trigger the trafficking of... 6 Ukraine from Washington 7 Finland and Sweden plan to apply this week to join... 8 Johnson proposes a "bonfire" of European... 9 Biden y Draghi: 10 Musk to reverse decision to ban Trump from Twitter 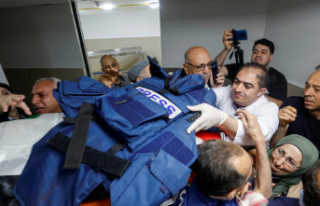 Al Jazeera journalist shot in the head in Israeli...