"The suspects allowed their foreign customers to obtain a class 5 (passenger vehicle) and possibly a class 1 (heavy goods vehicle) driver's license from the SAAQ, using falsified documents", indicated the Sûreté of Quebec in a press release.

Among the suspects apprehended are two Quebecers, Gurvinder Singh, 55, of Laval and Gurpreet Singh, 33, of Saint-Eustache. The other four suspects, aged between 50 and 68, were arrested in Cornwall and Caledon, near Toronto.

The suspects are expected to appear at the Montreal courthouse later on various charges, including production and use of false documents.

1 Pitched battle between German and Scottish fans in... 2 Summary of Plus belle la vie episode 4543 of May 18,... 3 “L’air d’aller”: Antoine Olivier Pilon and... 4 A chemical accident at the Manises water treatment... 5 The Barcelona Music Museum comes out of the showcases 6 Abrines: "I came to Barça to recover my happiness... 7 Indonesia: a ferry runs aground on a submerged island... 8 Europa League: TV channel, streaming... How to follow... 9 UEFA Champions League: Date, Tickets...Final Info 10 Caribou: the Innu Council of Pessamit hardens the... 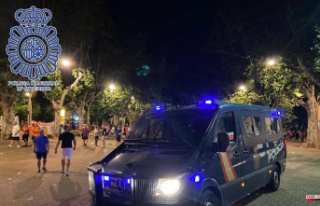 Pitched battle between German and Scottish fans in...