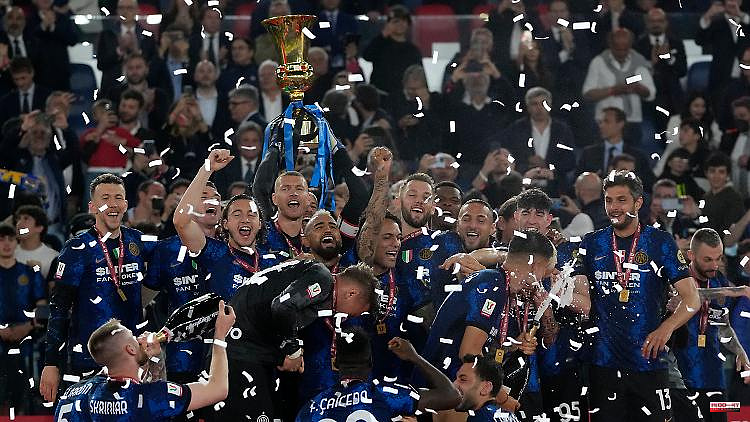 Former Bundesliga pro Ivan Perisic shot Inter Milan to victory in the Italian Soccer Cup with a remarkable brace in extra time. In the final against Juventus Turin, the Croatian's two goals ensured the deserved 4-2 (2-2, 1-0) final score and thus Inter's eighth cup win. In front of 67,944 spectators in the Olympic Stadium in Rome, the former professional from Dortmund, Wolfsburg and Bavaria was first successful with a penalty kick (99th) and shortly afterwards with a dream goal in the corner (102nd).

Perisic's brace in four minutes decided a grueling Derby d'Italia in which the lead changed three times and Inter were awarded two penalties. First, Italy's European champions Nicolò Barella put Inter in the lead early (6th). After the break, Juventus turned the game around with two quick goals from Alex Sandro (50'), who scored with a deflected shot, and a counterattack by Dusan Vlahovic (52').

The former Leverkusen player Hakan Calhanoglu gave Milan a 2-2 equalizer and thus extra time in a fast-paced game with a controversial penalty kick (80 '), which was then turned into an untenable one. Previously, Inter's striker Lautaro Martínez had cleverly threaded in a duel with Juve defenders Leonardo Bonucci and Matthijs de Ligt. After referee Paolo Valeri whistle for a penalty, the video referee intervened briefly, but the decision stood.

The scene in the 99th minute was undisputed, when again de Ligt in the penalty area scored too rustically against Inter defender Stefan de Vrij. The game continued at first. After a VAR note and a reassessment of the duel on the sidelines, referee Valeri decided to take a penalty again - which Perisic converted coolly. The Croatian decided the game just a few minutes later when he took the ball on the edge of the penalty area with his right hand and then hammered it into the top right corner of the goal with his left hand.

With the eighth cup success in the club's history, Inter kept their chances of the double from championship and Coppa Italia. In the league, Inter is currently two points behind local rivals AC Milan with two games left. In addition, the "final curse" of the German national player Robin Gosens, who only switched from Atalanta Bergamo to Inter in the winter, ended with the Milan final victory in Rome. After Gosens had previously lost the final twice with Atalanta (2019 0-2 against Lazio Rome - 2021 1-2 against Juventus), he was now able to celebrate his first title at the third attempt - but without actively playing on the pitch in the final stand.

Juventus, on the other hand, has been ending a season without a title since 2011: Turin no longer has a chance of winning the championship in Serie A. In the Champions League, they had already failed in the round of 16 at FC Villarreal, who later conquered Bayern. From 2012 to 2020, the championship title went to Juventus nine times in a row, but last year there was still a cup win to celebrate. This time it was only enough for a place in the final, the final whistle of which Juve coach Massimiliano Allegri was no longer allowed to experience on the sidelines. He had already seen the red card in the 104th minute after violent protests.

1 Emotional game in Gladbach: Ukrainian team plays again... 2 Newspaper reports on offer: Does Bayern excavate Pogba? 3 Munich, Stuttgart, Frankfurt: Germany plays in the... 4 Celebrating players inspire: The surprising longing... 5 Mazraoui as the first new signing: FC Bayern is working... 6 Wimbledon shock, season off: was that it, Roger Federer? 7 Team boss raves about the professional cyclist: For... 8 Concussion in Araujo: All clear for Barça professional... 9 "I'm satisfied with my performance":... 10 The club icon ignores the celebration order: The handball...