Correos projects that the strike will be followed-up by 12% 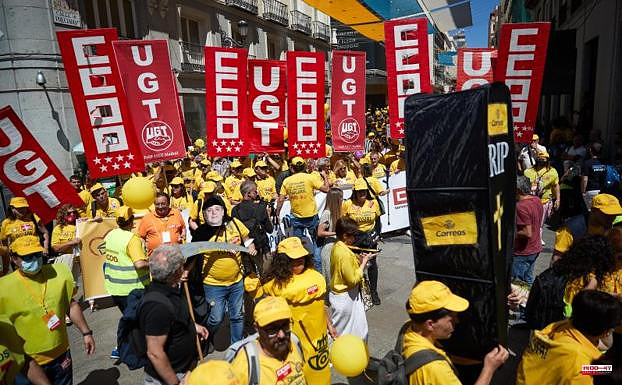 First day of strike at Post Office. Three days of strikes have been called by the unions to protest the "dismantling of the company" and to denounce the "failure" to which they consider the labor management and business of the public company to be leading. They have also demonstrated in downtown Madrid.

According to union estimates, more than 20,000 people arrived from all Spanish provinces and supported the protest. This was "by far" higher than the UGT's expectations regarding the expected attendance. For an hour and half, they walked the streets of the capital wearing T-shirts and banners reading "stop scrapping", “for the viability and public mail, mobilize", or "against cuts, a sufficient workforce, and with the right>>.

Jose Manuel Sayagues, secretary of UGT Public Services' Postal Sector, stated that "the class unions are still alive" and that workers have joined forces to channel their anger and frustration over the closing of the Post Office.

UGT and CC OO consider the general strike a success and give an estimate of the follow-up at 90% (more that 42,000 workers). Correos, however, reduces this to 11.85% and assures that the activity within the company is "normally and with no incidents".

Correos took the opportunity to refute the allegations made by the unions. It claimed that it "guarantees" the postal service's quality and denied that any plans were to privatize or eliminate jobs. It also made it clear that the company will remain public. While it denied that Correos Express would transfer its activities to Correos Express it said that they are not closing any offices or distribution centers and that it is expanding their service. It is digitizing points of interest to the public in rural areas.

"It is false to say that Correos will fragment. This internal restructuring will not impact the company's unity. This is an internal reorganization that focuses on specific business lines to improve management within the company structure, which "the company defended itself."

According to union data, the strike started this morning with a follow-up of 80% in a first shift at 22 logistics centers located throughout the country. The centers are located in the major cities. It rose to 90% by the end of the shift.

CCOO/UGT will continue the mobilizations in June 2/3 with concentrations in major provincial capitals to demand a modern, competitive public postal model. This is endorsed by the whole society and the radical paralysis in the current plan to demolish public mail. It is currently in one of its most critical phases in history.

1 The average mortgage is 613 euros annually due to... 2 Elon Musk and Twitter sue investor over takeover offer... 3 Campaigners claim that a Meta VR platform has been... 4 The results of all elections in Castilla y Leon from... 5 Angel Gabilondo was admitted with a mild arrhythmia... 6 Tesla CEO Elon Musk announces an end to remote work... 7 Tomas Saez, the actor in 'The Miracle of P. Tinto,'... 8 La Alcazaba is a scene of fashion, art, and gastronomy... 9 What happens to the skin after a tattoo is applied?... 10 The black night of the champion 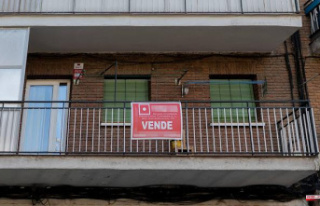 The average mortgage is 613 euros annually due to...