Castilla-La Mancha is going to be the first region to "eliminate the roles in the relationship between the different links in the wine chain" of the Autonomous Community.

Castilla-La Mancha is going to be the first region to "eliminate the roles in the relationship between the different links in the wine chain" of the Autonomous Community. It will do so through a digitalization project that, with Blockchain technology, will allow a simple QR code to relate from the farmer to the consumer and the sector with the Administration; and it also has the traceability of a food as important as wine.

This was stated by the Minister of Agriculture, Water and Rural Development, Francisco Martínez Arroyo, this Wednesday in Albacete, where this pioneering digitalization project for the wine sector was presented. A project that has been described as "regional", which is launched by the Ministry of Agriculture, Water and Rural Development, in collaboration with the University of Castilla-La Mancha, the Science and Technology Park of Albacete and the company Tragsa, which, In addition, it will have graduates from the regional University.

It is an investment of 2.5 million euros of public investment available for innovation in a sector such as wine. In this way, the concept of Blockchain will be launched so that, through a QR code, "everything that interests us" can be identified, from the consumer who consumes the product in a restaurant or acquires it in the distribution, and in the relationship between the Administration and the sector.

What it is about, said Martínez Arroyo, is to anticipate what society and the PAC itself are going to demand of us and to do so in a sector as important as this one.

The Minister of Agriculture, Water and Rural Development, in addition, in a forum in which there were financial representatives or representatives of the agri-food sector, such as representatives of UPA, ASAJA or Agri-food Cooperatives, has made known the most important points of the Law of the Viña y el Vino that will arrive at Parliament "at the turn of summer" for its final debate and whose project was approved this Tuesday in the Governing Council.

A Law that is recovering, in the region that is considered the world's winery, because it was repealed by the PP Government, something that it has said was "a mistake", above all, because the wine sector is the "most relevant sector from a point of view". economic, social, territorial and regional feeling point of view”.

In data, this sector, in Castilla-La Mancha, represents by itself, he recalled, 4.6 percent of regional wealth; it invoices 1,740 million euros and, only last year, 22.7 million hectoliters of wine and must were produced, of which 17.2 million were sold abroad to 150 countries.

Behind him, Martínez Arroyo recalled, there are 80,000 winegrowers and 484 wineries and cooperatives that transform the product in rural areas and a social economy "essential for our smallest towns." And, "for this sector to have a future, the Law is necessary."

A rule that stems from a strategic plan for the wine sector, agreed with the sector, and in which the need for a law to achieve the objective of the sector's turnover being 2,500 million euros in 2025 was highlighted. .

In this way, this regulation regulates the procedure for authorizing new vine varieties, oenological practices, geographical indications and wine traceability, where this digitization project presented today in Albacete is framed.

It includes the creation of a regional wine committee and opens the door to a regional wine interprofessional, necessary for the organization and regulation of the sector

In addition, it creates the figure of estate wines, within the denominations of origin and the Protected Geographical Indication, when the wine is made on the farm itself with grapes exclusively from it, being "an additional optional labeling".

The event, which took place at the Technology Park of Castilla-La Mancha in Albacete, was attended by, among others, the director general of the Science and Technology Park, Agustín Moreno, as well as the vice-rector for Transformation and Digital Strategy, Ismael García or the general secretary of the Ministry, Juana Velasco.

1 Puig's brother's partner acknowledges to... 2 Schedule and where to watch the Champions League final... 3 The perpetrator of the Texas school massacre barricaded... 4 Democrats will try to make it harder to own guns 5 Castilla y León reports the first suspected case... 6 Alicante Gastronómica promotes the 1st Potato Omelette... 7 The vice president of Castilla y León, 'besieged'... 8 The Diputación transforms Xorret de Catí into a... 9 Vizcaya Metal Unions threaten to take to the streets... 10 Alfredo, the rehabilitated former drug addict and... 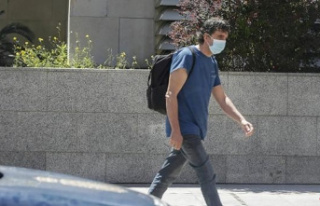