Songs are the end of everything.

Songs are the end of everything. The Cannes Film Festival celebrates the unifying power and beauty of music when it arises. These twelve days saw Ethan Coen's documentary "Jerry Lee Lewis Trouble in Mind" (without Joel), another film on David Bowie ("Moonage Daydream") by Brett Morgen, and a third document by Dominique Gonzalez Foerster and Ange Licia on "Christophe...definitely" on the night-owl party with "Blue Words "...

Thursday night was "Salam" projected by Anne Cisse and Houda Benyamina. This was Melanie Georgiades, also known as Diam's since her retirement from the stage. The festival partner, Brut produced the event. But it was not the one many expected. The rapper dives into the topic with an apparent (and sometimes touching) honesty. She discusses her journey to Islam, including depression, suicide attempt, discovery of faith and images she was veiled by Paris-Match. There has been a lot of media attention about Islamophobic attitudes and investment in orphanages in Africa. The music side is more horrible than any other, with her rapping on synthetic choirs. The film "Salam" will be shown in theaters for two days (July 1, and 2) but has the benefit of being very short (1h20).

The same cannot be said about "Elvis", which is in theaters June 22. Baz Luhrmann's circus biopic is bloated Barnum, filled with inspiration gaps. It succeeds in portraying showbiz and America like a destructive freak-show. The story centers on Presley (Austin Butler), who is an icon of eroticized culture hybridization as a queer doll (Tom Hanks) and Colonel Parker (Coleman Parker), who is a mysterious and monstrous huckster (Tom Hanks). The showman and his snowman. Or, the America of interbreeding change and families versus conservative capitalism and families. 2h40 pop baroque, which reconnects with an idea specific to "Moulin-Rouge", a exhausting mash-up of musical comedy.

This edition is plagued by long, exhausting durations. This is not a new problem, but it is becoming more problematic. The movies are too long. Of the twenty-one competitors, eleven spent more than two hours, five took longer than 2h20 and five did more than two hours, neither of which is appropriate. The 2h45 is even more damaging for the Iranian "Leila" and her brothers, within which lies a great film with twenty minutes less. It is being suggested that its director, Saeed Roustaee ("The Law of Tehran") will return to the editing room.

It would be a good idea to find the film on the charts. This would, however, validate its editing. However, paradoxically, it would not serve the film's purpose. The crazy lengthening of the footage can be explained by the omnipotence of festival-dubbed authors, the lack of constructive dialogue between filmmakers, producers, and viewers (most blockbusters are 2h30), and changes in consumption patterns. The film object is lost in our world of all-images. This threatens the artistic unity and coherence which make up masterpieces. The prize list could be transformed into a podium for work-in-progress.

"Dalva", "Alma Viva"... Cannes continues to be a disappointing place for filmmaking, but the first feature films that broke are innovative and challenging, which is encouraging signs of the future.

They starred together in "Parfum Vert", an adventure comedy directed by Nicolas Pariser that closed the Quinzaine des Realisateurs at Cannes. We met Sandrine Kiberlain, Vincent Lacoste.

"L'Obs", which brought together the time for an interview (and a cruel quiz about the Palmes d'Or), the Stakhanovists from this 75th Cannes Film Festival – the actors defend three films each (two movies and a series of films for Vincent Lacoste). You can read it here. 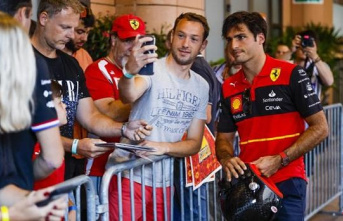