'Caminos del Queso', a journey through the province of Valladolid through the artisan and innovative flavor

More than twenty dairies, producers, refiners and shops participate in the 'Caminos del Queso' initiative promoted by the Alimentos de Valladolid brand to promote the sector in the province and make it known both inside and outside its borders, without giving up its potential as a tourist attraction linked to gastronomy and crafts. 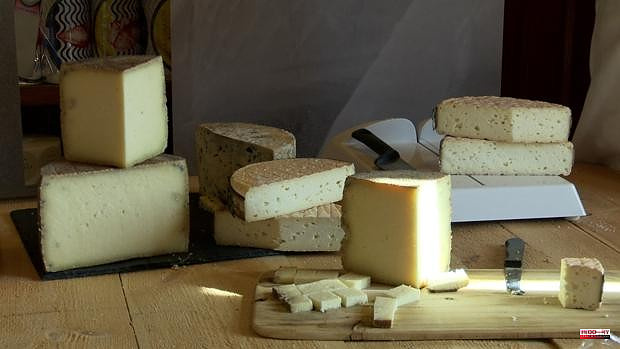 More than twenty dairies, producers, refiners and shops participate in the 'Caminos del Queso' initiative promoted by the Alimentos de Valladolid brand to promote the sector in the province and make it known both inside and outside its borders, without giving up its potential as a tourist attraction linked to gastronomy and crafts.

A tour of the province through flavor that can be done either from the comfort of the living room, through the variety of products offered by Valladolid producers, or through haute cuisine restaurants throughout Spain that are increasingly committed to Valladolid cheese in its very different forms, but that its promoters aspire to increasingly become an invitation to get to know the province and its dairies.

As the head of the Valladolid Provincial Council's Food and Agriculture Promotion Service, Francisco Fuentes, explains, the project seeks to promote and disseminate "all the wealth that exists in the province of Valladolid" around the world of cheese, but which is still " very unknown”.

In statements to Europa Press, Fuentes underlines the evolution that this sector has experienced in recent years with the incorporation of new dairies and an "important transformation" of what has been the classic production of cheeses in the province until now.

Thus, new projects have emerged, while other traditional ones have also incorporated new elaborations, different masses, soft pastes or other types of cheese not so identified with Valladolid, which aim to make themselves known both in the province and throughout Castilla y León and in the whole of Spain.

Refining -the "signature" adaptation of own cheeses acquired without complete maturation to carry out specific curing "to the taste of each refiner"- plays a key role in this new horizon for Valladolid cheeses, as Fuentes acknowledges, which makes it possible to increase the range of less common products in the province, such as blue, cheddar or large-format cheeses -as Granja Cantagrullas does in Ramiro under its different labels-, or even mozzarella and burrata, an original commitment to tradition Italian that Salvatore, a Neapolitan based in Portillo, claims from Quesería Zucca.

The 'Cheese Roads' initiative, now under the umbrella of the Valladolid Provincial Council under its Foods from Valladolid brand, arose from the hand of Granja Cantagrullas, Cañarejal en Pollos and Campoveja in Serrada with the aim of combining product dissemination and tourism promotion .

This last cheese factory, whose origin dates back to 1952, remains a family and artisan business that is now in its third generation, which has been in charge since 2002 and has promoted the development of a more varied and innovative range of products.

The founder of the cheese factory was Félix Sanz, a baker converted into a cheesemaker who began buying artisan sheep cheeses from the shepherds in the area to meet the requests made by his brother-in-law from Barcelona and to whom he sent them via train.

As Jesús Sanz explains, Quesería Campoveja currently develops three lines of products, the first of which is linked to the artisan tradition based on raw sheep's milk and natural lamb rennet, with cheeses matured on wooden boards and aged underground.

A second, linked to signature cheeses, which offers "more innovative" products that have obtained greater recognition at a national and international level, such as smoked cheese, which was awarded as "the best in the world", or truffled cheese. The third opens the door to all the refining work, sometimes "relegated to production", but which allows for "greater cheese diversity".

Sanz defends this commitment to diversification and innovation as a way of providing "added value" to the product, but recognizes the importance of "the history" of the two preceding generations, something "essential" to give "a differentiating touch" to the quality of your product. "We are children of my father and grandchildren of my grandfather," emphasizes Jesús Sanz.

In 2011 another of the founders of 'Caminos del Queso', Granja Cantagrullas, began its activity, a family business that emerged to take advantage of the milk from its native breed of sheep, which as of 2018 is dedicated exclusively to the production of suckling lamb with Protected Geographical Indication.

Since then, Cantagrullas has turned to local milk producers, but maintaining the goal with which the cheese factory was born, which is to have fun and "enable the consumer to discover the world of milk and cheese from a different perspective", as points out one of its managers, Rubén Valbuena.

To this end, Granja Cantagrullas exceeds the decade dedicated to the production of cheeses "different" to those made in Castilla y León. Likewise, they were the first to obtain health authorization to make cheeses with very short maturations from raw sheep's milk, which was their "first differentiating nuance".

In 2014, Cantagrullas opened its own point of sale, Quesería Cultivo, which today has four own stores and a distributor for different brands from the province and from all over Spain that are served to specialized establishments and restaurants. To this is added the cluster of which they are part for the export of cheese to places such as Singapore, Switzerland, the United States or Peru.

Campoveja's representative underlines the "potential", both in volume and quality, of the province in relation to cheese, for which he has defended the extension of these 'Cheese Roads' that allow the development of the Valladolid cheese factory and link it to tourism gastronomic as is already the case with wine tourism, which "is complementary to that of cheese".

In this sense, his counterpart in Gantagrullas encourages to continue exploring tourism linked to cheese, which would happen by "opening the doors of the dairies, showing their spaces and making known a humble and ancestral know-how like this one".

This tourism project, an aspiration of the initiative since its inception, will be "a second step" in which Alimentos de Valladolid will work with the province's cheese factories so that they have "a stable offer" for the visitor, says Francisco Fuentes.

Within this commitment to promotion, 'Caminos del Queso' will participate until May 29, through the Quesería Cultivo store in the capital of Spain, in Gastro Festival Madrid, with tastings in which cheese and wine Valladolid will go hand in hand

Likewise, on Saturday the 28th, the Espacio La Granja in Valladolid will host a major event in which 40 tasters will prepare a guide in the style of those made with wines, so that buyers can have a score for the chosen product.

This tasting will be held in the morning with more than 400 samples, while in the afternoon La Granja will be the scene of a fair open to the public and with free admission in which eight cheese dairies from Valladolid will share space with eight others from different parts of the country. such as Galicia, Asturias, Castilla-La Mancha or Andalusia to sell and make their products known to the public.

With initiatives like this, the Espacio La Granja seeks to become a "promotion and knowledge hub for the world of cheese at a provincial and national level" on the banks of the Pisuerga, because, as Fuentes points out, "the more dimension" is covered and the more cheeses from outside are brought, the more "strength" the sector and its whole will have.

1 Streets closed in Valencia and traffic restrictions... 2 The lawyer Dolors Feliu, elected president of the... 3 The Castilian and Leonese send more than 67,700 tons... 4 Xavi: "Lewandowski is one of the options, but... 5 $ 40 billion: Joe Biden signs the law providing colossal... 6 "Putin destroyed everything": former pro-Russian,... 7 Two dogs abandoned by their owner saved from starvation 8 Montreal: several obstacles on the road network for... 9 Oilers don't let it get you down 10 Russia specifies that more than 960 senior US officials... 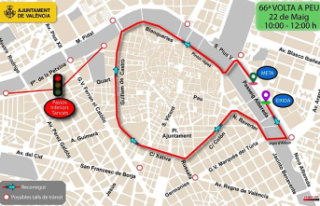