Camels: «It is very cool that you are valued in your city»

After last night's kick-off with Cupido, Rigoberta Bandini and other artists, the Tomavistas festival enters a weekend as summery as expected by music lovers in Madrid.

After last night's kick-off with Cupido, Rigoberta Bandini and other artists, the Tomavistas festival enters a weekend as summery as expected by music lovers in Madrid. Suede, Carolina Durante, Biznaga, Yawners, Jarvis Cocker, Kings of Convenience, Kokoshca and La Plata will take to the Ifema stages for two days that will also feature purebred Madrid natives such as Camellos, a quartet that debuted with an album who pays homage to his neighborhood ('Ambassadors'), and who just released his long-awaited new work just a few days ago, 'Manual is style'.

"We were already at the festival in 2019, we were the first to play on the entire lineup," says its singer and guitarist Fernando Naval.

“Even though it wasn't the best time, people made an effort and came to see us. And now, two years later, we return at an unbeatable time, on Saturday at half past eight in the afternoon. It is a pleasure that a festival as important as Tomavistas values ​​you, it is a reward for the work we do. And of course, it is very cool to be valued in your city. It is going to be a concert not to be missed, we bring new musicians for the live show and we really want to play the new songs».

They arrive to present a formidable third album in which they have made a qualitative leap in terms of instrumental richness, and which has been recorded at the La Mina studio in Seville, where they have had "an incredible experience" with Raúl Pérez, one of the most respected producers on the scene. The album also features a totally luxurious collaboration with a strong Madrid flavor: the great Josele Santiago, who sings with them on the song that opens the repertoire, 'Cambios de humor'. "Turns out the guy likes our songs," they say puffed up with pride. «We consider ourselves largely heirs to the rock of Los Enemigos. We've listened to them all our lives at home, in the car... and when you see that Josele Santiago is suddenly crossing the door of your recording studio to sing with you... well, you're amazed. It has been a huge honor."

In 'Manual de Estilo', Camellos have been able to capture the tragicomedy of urban life with the unmistakable and inimitable style that characterizes them, reflected in songs like 'La hora Llorar' («which is nothing more than the time of the appointment with the psychologist", they clarify between laughs) or 'La libertad', which speaks of "that false idea that they sell us that if you fight for your dreams, they will always come true, which is quite dangerous because if you don't achieve it, it burdens you with a guilt that is not real. And it is that these kids, despite being hilarious on stage, never stop launching more or less direct messages in which they reflect a generational disenchantment with which it is very easy to identify.

The pandemic has not been exactly good for a group like theirs, which lives by dancing and sweating, but after their appointment with Tomavistas (their turn is this Saturday at eight in the afternoon), Camellos will have a summer ahead full of 'festival' dates that fill them with hope after two years of hiatus in which they have only played for masked and seated audiences. «Having people like that was a bit frustrating for us and for them, it was something that was noticeable from the stage. But at last the good begins », they say rubbing their hands. "This summer is going to be the crème de la crème."

1 Spooky! 2 The notes of the regular phase 3 "It's not a two of spades" -Jean Pascal 4 Audits in surprise control to Formula 1 teams 5 The shirt that ridicules Atlético in networks 6 McIlroy takes PGA Championship lead, Scheffler and... 7 The CIS confirms the worst fears of the left at the... 8 One question, if you don't mind: What do you... 9 Marta Torrejón: «A part of society has learned to... 10 “Monkeypox is a disease that is spread at home” 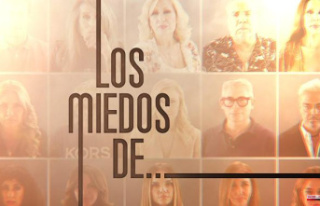