It had rained in the morning, but it was a light rain that added to the heat. 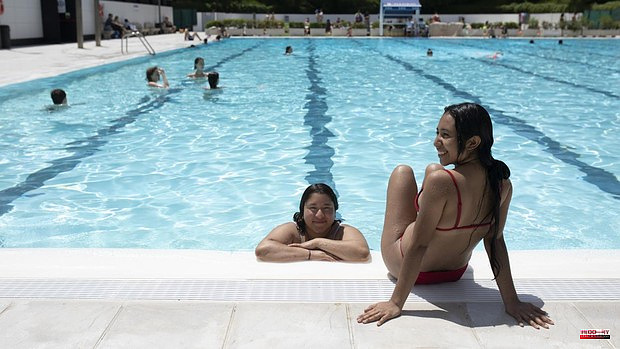 It had rained in the morning, but it was a light rain that added to the heat. The most tropical that Madrid could have in May and in 'los isidros'. In the Metro that led to the Casa de Campo Lake swimming pool, the children showed the illusion of not only a brand new summer, but something else: the normality of not having to sunbathe with a mask. The very white skins, of course, that one day is a day and there will be time, other clearer days, to smear on Nivea.

Lola counted the magazines she carried in her beach bag with sunglasses, in the car, from another time. "A brand new summer," she was urged, and she, in the swaying of the train and the vocal distortion of the mask, said something like "let's see if the day respects us."

Because in the Metro, the day the Madrid swimming pools opened, there was one or another who wore that half-time vest. And yet, after the storm, the sky opened up and in the two swimming pools of the Casa de Campo everything was a merriment. 21.9 ° marked the water thermometer.

As Alicia Martín, General Director of Sports of the consistory, recalled, "everything was developing normally", despite the fact that admission was free and despite, also, that constant trickle of people from Madrid who arrived at the venue when the day was consolidated as pre-summer And already in the pool the human fair, the white meats, little sun protection, and the voyeur and the one who runs along the edge of the patina of water and is warned by the lifeguard, who also has that sanctioning task on him.

A young albino was wearing a red shirt, and on the benches that lead to the changing rooms and are in the shade, Joaquín, "from here all his life" watched that human treatise that is a swimming pool go by. "Waiting for some friends, those of all years," he confirmed, when he recognized those old friends, "pool lovers" forever. Then they would go for the aperitif with their Hawaiian shirts and that dark Spanish who gives the play to the retiree.

Alcohol could not be brought into the premises, but 'de estrangis', Roberta, a mulatto and Brazilian, accounted for a can from Madrid and five stars. "It's just that the water is very cold," she justified herself, while the ten friends of hers who were making a circle on the lawn looked for the synonym "exaggerated" in perfect Spanish. And there they were, with some half-played cards and the notes of the race protruding from the backpacks. The joy of study, play, sun and bath.

If you looked at the sheet of water you could see the winter swimmer and the one who swam like a dog, who has everything in the vineyard of the Lord. And with a minimal swimsuit and smooth skin, Antonio, a carabanchelero from Venezuela, a Caracas native from Madrid, was waiting impatiently for “a friend”, wearing his swimsuit without complexes. Because he, from the "coldest area" of Caracas, "El Junquito", was not going to be daunted by four drops. His first swim of the season listed him as "pure glory," and he knew that yes or yes, "hands down," he was going to soak his Speedo. And, 'indisputably', he launched headfirst and gave their respective lengths with more will than style, everything is said.

The albino was still with his friends and his bathing suits, and the sun was taking away photographic lenses in a pool that, on the eve of San Isidro, was free, like all in the Capital. Some young woman wore a carnation in her hair and wore an 'isidril' heart of palm, which is what opening the municipal pools on the eve of Patron's Day has to do with everything that the Prairie has to offer today.

The City Council described as "traditional" the opening of the pools, at a maximum price of 2.25 euros per beard, while emphasizing that although there were no capacity limitations, two shifts and one hour have been enabled, of 3:00 p.m. to 4:00 p.m. to disinfect. A closure that, they admitted, contributes to the fact that "there were practically no incidents last year." When we get used to restrictions on capacity and the dystopia of sunbathing with a mask.

1 Provincial elections: 2 QS deputies back to defend... 2 CF Montreal wins in a hostile environment 3 Bergeron's future still uncertain 4 With three awards, including “Artist of the Year”,... 5 Life and miracles of San Isidro on a map: the city... 6 League Final with water up to the neck, the fight... 7 Organ donation: Swiss vote on presumed consent 8 Finland to formalize its candidacy for NATO, decisive... 9 Healing Russian wounded: the Hippocratic dilemma 10 Nordic Social Democrats surrender to the arms of NATO