Biden: "We are going to increase the relationship between Spain and the US with more ships in Rota"

US President Joe Biden met this Tuesday, after his arrival in Spain, with Pedro Sánchez in La Moncloa, where both made an institutional appearance prior to the NATO summit that takes place until next Thursday in Madrid. 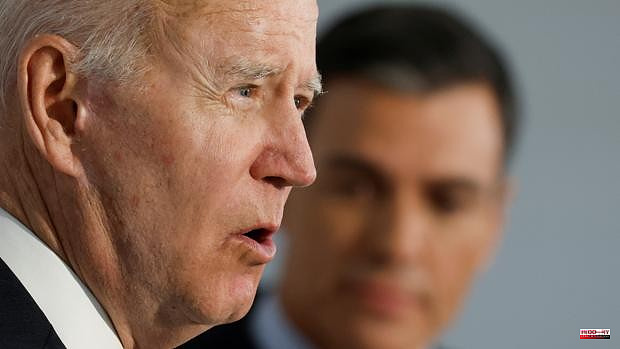 US President Joe Biden met this Tuesday, after his arrival in Spain, with Pedro Sánchez in La Moncloa, where both made an institutional appearance prior to the NATO summit that takes place until next Thursday in Madrid. A joint declaration comes out of the meeting that updates bilateral relations. Both countries commit themselves in it to strengthen "multilateral responses to transatlantic and global challenges"; to "strengthen cooperation in the field of defence"; to “defend democracy, human rights and gender equality” or to “promote safe, orderly and regular migration”.

After the interview, which lasted approximately one hour, Sánchez and Biden appeared in the Barceló Room of the presidential complex, both standing before lecterns.

Sánchez, who began his speech with a few words of welcome in English, has delved into the bilateral agreement, highlighting that there was no other like it since the one signed two decades ago by the then heads of Foreign Affairs of both nations, Josep Piqué and the late Madelene Albright , under the Government of José María Aznar in Spain and George W. Bush in the White House.

The head of the Government assured that "this visit has marked an important milestone in bilateral relations between the two countries." Biden has reciprocated by describing Spain as an "indispensable ally" and thanking our country, among other things, for welcoming Ukrainian refugees. He has also confirmed that "we are going to increase the relationship between Spain and the US with more ships in Broken".

All this after the announcement of the increase in destroyers at the Rota base (Cádiz), which was announced by the US National Security Adviser, Jake Sullivan, in a communication to the US special envoys on Air Force One. The presidential plane He was arriving from Germany, the first leg of Biden's European tour to attend the G-7 summit. The US currently has four ships equipped with the Aegis combat system as part of the naval component of NATO's anti-missile defense system in Europe.

Biden has landed at the Torrejón de Ardoz air base (Madrid), where he has been received at the foot of the runway by the King. Later, after four in the afternoon, he arrived at La Moncloa, where he was received on the steps by Sánchez, who went down the steps to greet him with a handshake, as soon as he got out of his official car. The North American president and Felipe VI also meet this afternoon in La Zarzuela. At night, the Kings offer Biden and his wife, Jill, a gala dinner at the Royal Palace, which the President of the Government will also attend. The American first lady one day advanced her arrival in Madrid, where she held a meeting on Monday with Queen Letizia and also with Sánchez's wife, Begoña Gómez. This Tuesday, on their second day of visits, Jill Biden and the Queen visited a Ukrainian refugee center in Madrid.

1 Hundreds affected by the cancellation of Volotea flights... 2 Covid infections in Castilla-La Mancha rise notably... 3 Ávila becomes the first Spanish city to host a test... 4 Catalonia asks for a rational use of primary care... 5 The murder of Juan de Dios for a possible revenge:... 6 He kept an anti-tank rocket under his bed. 7 The alleged murderer of Marta Calvo contacted more... 8 Fifty dead after a fire caused during a riot in a... 9 The six decisions that will come out of the NATO summit 10 How to calculate if I have been paid well the extra... 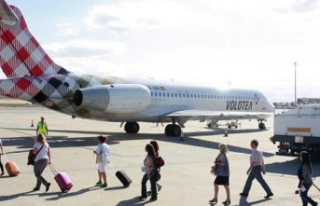 Hundreds affected by the cancellation of Volotea flights...