Before and after the reform of Felipe II: changes in bus stops and new craft stalls

The intermodal area of ​​Felipe II is opening. 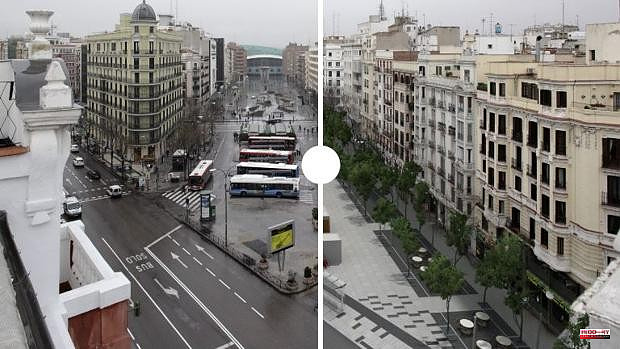 The intermodal area of ​​Felipe II is opening. The works that the City Council has carried out, and in which it has invested 2.7 million euros, has relocated the bus stops and renovated and relocated the craft market stalls, which present a much more orderly appearance. With this, it has been possible to gain in accessibility and space for the pedestrian.

The intervention has affected 11,000 square meters of land. The Mayor of Madrid, José Luis Martínez-Almeida, visited the area together with the Delegate Councilor for Works and Facilities, Paloma García Romero, and the President Councilor for the Salamanca district, José Fernández. And he has been able to see, 'in situ', how the space is now more comfortable for pedestrians, more orderly in its uses, and more in line –in distribution of surfaces, design and in the materials used– with the intervention carried out in Dalí square in 2005.

In fact, the mayor of Madrid announced his intention to continue working in this environment: after the summer an action will begin in Dalí square to "improve the pavement, increase the green areas and carry out the homogenization of the terraces".

Dalí's square was built at the end of the 1980s, as part of an agreement with the great Catalan artist, who sponsored the work project. Later, in 2005, it was the subject of a remodeling that was much discussed in its origins. The statue of Isaac Newton, an outstanding element of it, has been vandalized on more than one occasion, by stealing the sphere that hangs from the figure's right hand.

The work completed yesterday has been centered between the streets of Narváez and Alcalá, which concentrates a traditional craft market very visited by the people of Madrid, and several EMT bus docks, as well as commercial and restaurant activities. But all these uses were mixed, so that one and the other hindered pedestrian traffic from Plaza de Dalí to Calle de Alcalá y Goya.

For this reason, the work began, which has meant relocating the bus stops in one strip, and the booths of the permanent craft market in another. In addition, these posts have been completely renovated. With these two actions, it has been possible to increase the area for pedestrians by 19 percent, and gain accessibility.

By separating the uses into parallel linear bands, a single lane, eight meters wide, has been created for the circulation and stop of buses between the streets of Narváez and Alcalá, in both directions. A formula that has decongested the saturation of uses that existed in the area.

The new environment uses different shades of color or finish on the pavement, and also different textures, as indicated by the current accessibility regulations: the sidewalks have light gray granite slabs, except in the area of ​​the bus interchange, where the flooring is different in color and texture.

In order to respect and complete the existing tree lines and to meet the same criteria as that of Plaza de Dalí, delimited rest areas have been created facing the bus docks. And fifty new streetlights with LED lamps have been installed. Municipal sources explain that materials have been chosen for this area that will facilitate its maintenance and increase its useful life.

The work will be finished off by the municipal council of Salamanca with the installation of a new sculpture at the end of Avenida Felipe II with Calle Alcalá: it is a work by the Galician sculptor Manolo Paz, which consists of a stainless steel reticular structure, 550 X 210 X 210 centimeters, made up of cubes placed in an ascending direction, inspired by the motto 'From Madrid to heaven'.

1 All of Nadal's finals at Roland Garros 2 Schedule and where to see the Czech Republic-Spain 3 Coco Gauff: the child prodigy seeks the two crowns 4 Pol Espargaró: «Marc leaves us lame; without it,... 5 Gavi, from extravagance to main 6 These fish could reach luxury prices in the coming... 7 Mayumaná is charged with electricity in 'Current' 8 Break into a Dallas museum and destroy ancient Greek... 9 Beck, Little Simz and D.C. Fountains. straighten the... 10 Impulso Ciudadano sees censorship in the Catalan “language... 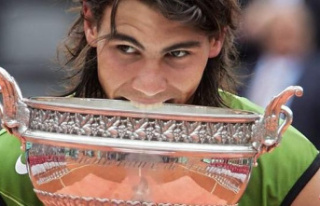 All of Nadal's finals at Roland Garros