Barça beat Madrid again and will play the Cup final

Barcelona and Sporting de Huelva will play the final of the Copa de la Reina this coming Sunday after they eliminated Real Madrid and Granadilla de Tenerife, respectively, in the semifinals. 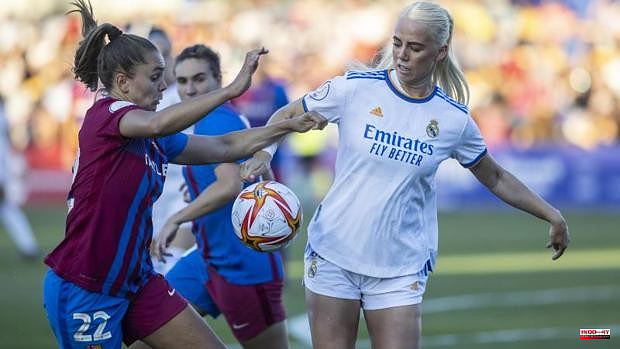 Barcelona and Sporting de Huelva will play the final of the Copa de la Reina this coming Sunday after they eliminated Real Madrid and Granadilla de Tenerife, respectively, in the semifinals. A goal from Lieke Martens (min. 18) put Barça on track for the classification. Barcelona had imposed themselves playing in white territory and had a couple of chances from Oshoala before the Dutchwoman, who is coming off an injury, scored the goal. The play was made by the right wing. The ball went to Alexia Putellas, who reached the baseline and the death pass from him was pushed into the net by Martens. As soon as the second half started, Barcelona extended the advantage.

A deep ball from Lieke Martens to Oshoala ended up reaching the feet of Aitana Bonmatí, who scored the second (min. 47) and put Madrid's pass uphill. The tie was closed five minutes later with a goal from Mariona Caldentey from a corner. Oshoala scored the fourth (min. 75). Goleada culé to staunch the open wound in Europe.

Barcelona, ​​​​which arrived very touched after losing the Champions League final against Lyon, once again demonstrated its superiority in national tournaments, something that Alexia Putellas herself denounced after falling to the French in Europe on Saturday. She demands the midfielder a more competitive league. Barcelona has won all 30 matches in the championship. And he has also beaten his strongest rival, Real Madrid.

Both teams played the sixth classic of the season (two League matches, one Spanish Super Cup match and two Champions League matches) with a full Barça team, who had prevailed in all the previous matches, although the white team had increasingly reduced the overwhelming advantage of the azulgranas, current champions of the Copa de la Reina. Jonatan Giráldez's pupils had won comfortably in the League (1-3 and 5-0) but suffered in the Super Cup (1-0 with a goal in the 90th minute) and the Champions League (1-3 and 5-2, having to come from behind in both matches). In addition, they came to the duel after the painful defeat in the Champions League final against Lyon last Saturday and the important last-minute loss of Caroline Graham Hansen and Melanie Serrano. A double-edged setback because the moral impact of the defeat is compounded by rage at trying to get up and against a rival like Real Madrid. «The team is going through a hard and fucked up moment and we are sad and disappointed, but this is football and it goes on. The nice thing is that it gives you many opportunities and we want to show the football we know and be ourselves and above all win. Matches like this make us grow as a team. We are professionals and we have our heads where it belongs, ”Mariona Caldentey warned before the duel.

Madrid, which has achieved the goal set this season of qualifying for the next Champions League, came to the duel somewhat more relaxed but with the desire to vindicate itself and show that the distances between the two teams are closing. «We have played five times against them and we have been learning with the passing of the games. In each game there have been different proposals, we try to study them and damage the weak points they may have. We believe that we have the tools to beat them”, assured Alberto Toril. Misa Rodríguez, white goalkeeper, reinforced the coach's speech. «The dynamics that we have in the League with 14 clean sheets is important. We are getting games forward and it gives us a lot ». The white goalkeeper saw that good trajectory cut short against the Barça steamroller.

In the other semi-final, played on Tuesday, Sporting de Huelva made the only goal of the match profitable to reach the second final in their history after winning the title in 2015. A goal by Patri Ojeda with 20 minutes remaining in the match decided the tie, dominated by Granadilla. The team from Tenerife controlled the times and took possession of the ball, while the team from Huelva tried to maintain defensive order and do damage to the counterattack. Granadilla's offensive power, which ended with five strikers on the pitch, could not be reflected and Sporting Huelva achieved victory after a free kick taken by Cinta and a header by Ojeda.

1 The PSOE knocks down a PP initiative to honor the... 2 Eternal Mourinho: the king of European cups 3 Julián Camarillo, the polygon with the most surprises... 4 Álex Barahona shares his favorite route in Madrid 5 The great annual event of books, a large market and... 6 Gastronomic and beer summit in Príncipe Pío 7 Final of the Champions: 500 national police to shield... 8 Madrid opens a water and light pavilion for the first... 9 Madrid, promised land of macrofestivals 10 Green light to the regional laws of Civil Protection... 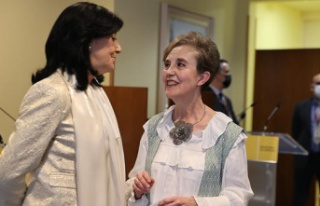 The PSOE knocks down a PP initiative to honor the...