An almost deserted Congress, an image of the breakdown of political unity against ETA

There was a time, not long ago, when the tribute that the Congress of Deputies dedicates each year to the victims of terrorism was one of the most popular and emotional acts in the Lower House. 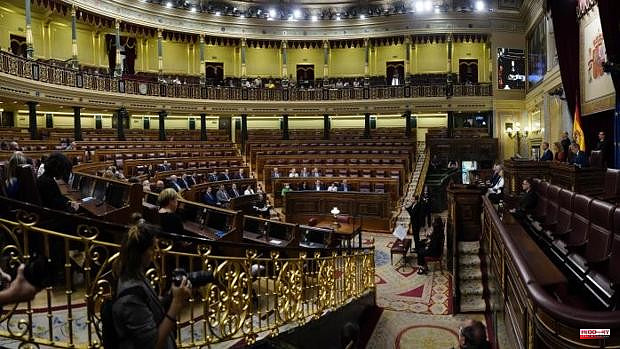 There was a time, not long ago, when the tribute that the Congress of Deputies dedicates each year to the victims of terrorism was one of the most popular and emotional acts in the Lower House. Since the Government of PSOE and United We Can make Bildu, political heiress of ETA, one of their "preferred partners", this act has become the best demonstration that political unity in favor of the victims and against the terrorists has been completely broken.

This has become clear again this Monday during the aforementioned tribute on the occasion of the International Day of Victims. It was only necessary to take a look at the chamber of the Carrera de San Jerónimo, practically empty because the main opposition groups and victims' associations have decided not to go as a sign of protest against the presence of Bildu, his pacts with the Government of Sánchez and his penitentiary policy with respect to ETA prisoners.

The representation of the PP has been limited to its two members in the Congress Table, Ana Pastor and Adolfo Suárez Illana, but without any popular deputy among the seats of the hemicycle. Nor from Vox, whose parliamentary group has kept a minute of silence in memory of the victims at the Puerta de los Leones, outside Congress. His spokesperson, Iván Espinosa de los Monteros, has assured the media that his group "cannot participate in any way" in what he considers a "false tribute" to the victims.

With so many absences as a sign of protest, the presence at this act has been limited to several ministers, including the Minister of the Interior, Fernando Grande-Marlaska, highly criticized by the opposition and victims' associations for his prison policy of accelerating and increasing benefits prisons for ETA prisoners, such as grade progressions, approaches to the Basque Country and Navarra or the transfer of the three Basque prisons to the Government of Urkullu (PNV).

The president of the Senate and the spokesperson for the PSOE in Congress, Ander Gil and Héctor Gómez, have also attended, in addition to the Ombudsman, Ángel Gabilondo, and representatives of the PNV and Podemos, such as Aitor Esteban and Pablo Echenique, respectively. And a little more. Unlike other occasions, the leaders of the main parties have been conspicuous by their absence, starting with the Prime Minister himself.

The one who has best summed up this lack of political unity was the president of the Victims of Terrorism Foundation (FVT), Tomás Caballero, during his speech. And he has done it with two rhetorical and direct questions to those present and absent in this act: «Do you consider that the memory that the victims deserve is the one we are building? Do you believe that we are approaching the fair normalization of coexistence with a clear recognition of victims and perpetrators?»

Caballero, who is the son of a councilor from the Unión del Pueblo Navarro (UPN) in Pamplona assassinated by ETA in 1998, has given voice to that lack of "democratic unity" that "no longer exists today", as the president of the FVT from the lectern of the Congress. He has been just as clear in asking politicians not to fall into "whitewashing and collusion" with the story that some intend to build on ETA and its current derivatives.

A story of equidistance between victims and murderers to which the 'ongi etorri', demonstrations and other acts of homage to ETA prisoners that continue to take place in the Basque Country and Navarra and that Tomás Caballero describes as "objectively unworthy and immoral" contribute. The president of the FVT has also launched another question to an almost empty Congress: "Why after so many years are there so many unsolved ETA murders", alluding to the 379 crimes of the terrorist group that have not even been tried.

After a few words from the president of the Congress, Meritxell Batet, bragging about the "defeat" of ETA and a couple of brief musical performances, the few attendees have applauded, said goodbye and have been parading from the Congress after an act that has lasted less of 45 minutes. Until next June 27, a few months before the next general election and after another year of pacts between the Government and Bildu. All of which portends that this tribute in 2023 will be even more lackluster than in 2022.

1 A missile hits a busy shopping center in Ukraine,... 2 Russian officer carrying Putin's nuclear codes... 3 Schedule and where to watch Cerúndolo-Nadal live 4 Small scare for Djokovic in his premiere 5 The forward of Espanyol begins to be scary 6 Doña Letizia dresses in polka dots for her meeting... 7 The smallest art movement in history: it had two members... 8 The Windcatcher Association and the 'Revista... 9 Transport and fishing, again against the ropes 10 Canary Islands and Morocco, face to face to talk about... 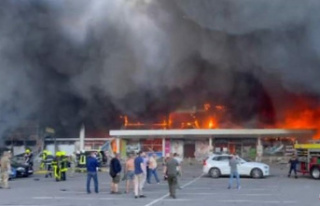 A missile hits a busy shopping center in Ukraine,...