The Spanish Second Division has been considered for years as one of the most difficult, equal and competitive leagues in Europe, a feeling that has been confirmed again this season, in which the two direct promotions have been decided on the last day and with suspense until the end. 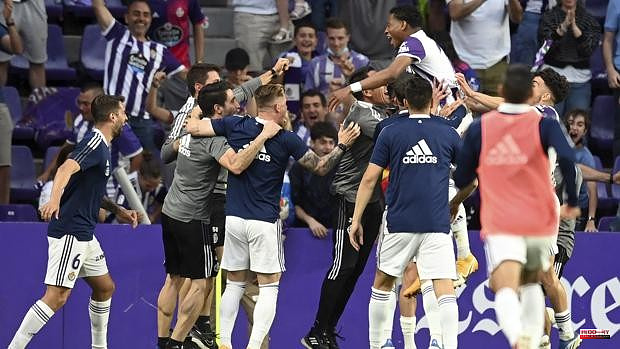 The Spanish Second Division has been considered for years as one of the most difficult, equal and competitive leagues in Europe, a feeling that has been confirmed again this season, in which the two direct promotions have been decided on the last day and with suspense until the end. Big prize to which Éibar, Almería and Real Valladolid aspired this Sunday, three teams separated by only two points after 41 games. After an afternoon of nerves and emotions on the surface, people from Almería and Valladolid were the ones who ended up uncorking the champagne because next year they will enjoy the First Division.

Alcorcón, who frustrated Almería's promotion last matchday, has become this Sunday the executioner of Eibar's dream, condemning them to have to play in the playoffs to be promoted with a goal from Zarfino on the edge of regulation time.

Eibar, a visitor to relegated Alcorcón, and Almería, who closed the League at Leganés, reached the decisive matchday with two lead points over Valladolid, forced to beat Huesca at their stadium and cross their fingers waiting for a stumble of one of his rivals for promotion. And the sky opened for the pucelanos when Borja Garcés scored in Butarque (m. 9), although Almería's reaction came six minutes later with Ely's equaliser. With three fans as attentive to their teams as to the transistors, the shock was repeated in Madrid, where a header from Omerou again put Leganés ahead. Drought at halftime in the other two games and 45 minutes ahead of suffering. And a lot of anguish.

On an afternoon in which uncertainty reigned, Valladolid came forward with suspense because Weismann's goal took a world to be validated by the VAR. Outburst of joy with reply because Gonzalo Plata celebrated the 2-0 next. A marker that placed the Pacheta team in direct ascent.

Sadiq made hearts race even more with Almería's draw (2-2), a result that matched the three candidates for promotion on points and condemned the Andalusians to the playoffs. Aguado closed the duel for Valladolid (3-0), who lived the last ten minutes pending the transistor.

The earthquake arrived in Alcorcón at the edge of regulation time, when a goal from Zarfino sent Eibar to the playoffs and returned Almería to the First Division, in which Valladolid will accompany them.

1 Rubén Sobrino presents the fourth edition of its... 2 Cibeles, second divine offering from Real Madrid 3 Real Valladolid beats Huesca and takes the pass to... 4 Legislative: There are some hiccups with the vote... 5 Ukraine: The 27 countries studied the exemption of... 6 The man who brings back to life the 'giants'... 7 WEATHER REPORT. Bad weather in Isere: 8,000 customers... 8 Ligue 1 Ligue 2 play-offs. AS Saint-Etienne is relegated.... 9 The good side of Courtois: his private chef, Luis... 10 The last salute to the champions: tribute in the Madrid... 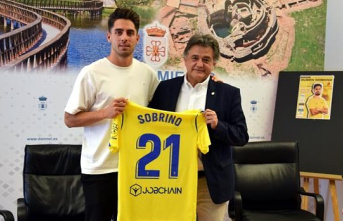 Rubén Sobrino presents the fourth edition of its...