Alfonso Rueda: "There is a long way to go, but now people do tell us that they see a PP president in Moncloa"

Today marks a month since he took office as president of the Xunta, after the departure of Alberto Núñez Feijóo to Genoa. 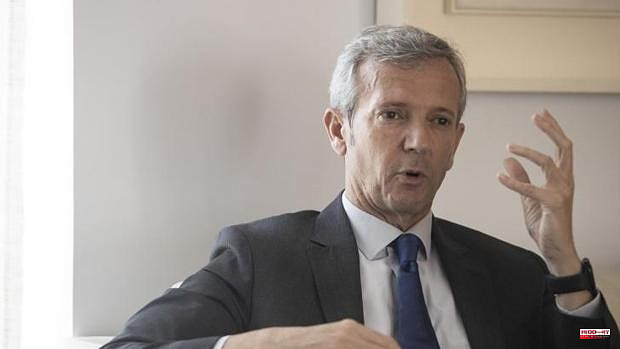 Today marks a month since he took office as president of the Xunta, after the departure of Alberto Núñez Feijóo to Genoa. Alfonso Rueda (Pontevedra, 1968) received the opposition last Monday, but he is on Pedro Sánchez's waiting list, to whom he wants to transfer the pending issues of Galicia, which are not few.

-Do you have a date for the meeting with Pedro Sánchez in La Moncloa?

-No, and the days go by. The other day we heard Sánchez tell Feijóo in the Senate that the opposition was in his way. I hope that he does not believe that the ordinary representative of the State in Galicia, which is me, is in his way.

-Do you think there is discrimination between Communities in the distribution of Next-Gen funds?

I don't like to talk about discrimination. I would not like to see another regional president complaining about what is given to Galicia. I ask that we be given what we deserve. We are asking for money for very powerful projects, such as Altri, Stellantis or green hydrogen. And we are not answered, while President Sánchez or his ministers commit funds elsewhere in Spain. This is even more bloody when there were 30,000 million for industrial projects, the Government has reserved them exclusively, the Autonomous Communities can only ask, and there are 26,000 immobilized. He worries us that these funds end up not being spent and Galicia being denied them. There are funds for everyone.

- Are the unemployment data made up?

-Feijóo said a certain thing: the discontinuous fixed, which have increased with the last labor reform, the months that they are not working are not targeted for unemployment either. If we want to cheat ourselves in solitaire… If the Government wants to make them disappear and make us believe that they work twelve months a year, it is not like that.

-Why has Galicia not appealed the decree of the Baccalaureate curriculum, as Madrid has done, despite disagreeing with the contents?

-We have the capacity to modulate it by 50%. We made allegations and some were taken into account. We believe that our adaptation finally reflects what we wanted and did not appear in the Ministry's decree: that the culture of effort has to be worth something. In such a competitive world you have to reward those who make an effort. In Galicia we have achieved that.

-Villa de Pitanxo. The families implore the government to authorize an expedition to inspect the ship, but the government refuses. Does the Xunta have margin to do it?

-I met with the families and listened to them. It was my obligation, something that the President of the Government has not done. His request seems logical to me. They do not ask to refloat the ship or recover bodies. They want to go down with some robots and inspect to find out the causes of the shipwreck. It makes no sense not to do it in these months when there is good weather. A ship is needed and a ministry has just sent one to Newfoundland. We made arrangements with a drone company to pay for their transfer and installation on the ship, but the Government refuses. They say that it is not possible, they argue technical reasons without accrediting them. It doesn't make sense for us to put a ship when there is already a state ship there.

-What do you think will happen in Andalusia next Sunday?

-It is going to consolidate what seemed unthinkable a while ago: that the left sink even more, but due to its own abilities. When the PSOE stopped governing, what everyone thought was seen: that the king had been naked for a long time. The rest of the left, cainite, we see it as in the rest of Spain. And that when the PP can govern, it has serious projects and maintains the confidence of the people in a place that is not simple like Andalusia. I hope that Juanma has more votes than the entire left, and that this is enough to govern alone.

-As the PSOE always thinks first of its own things and then of the people who vote for them or the community for which it is running, it is capable of that.

-What does the Sumar project that Yolanda Díaz announces suggest to you?

-He has taught us something curious, that so-called 'listening process'. When things have to be surrounded by convoluted words, there is always a problem. I am surprised by the clearly evident change in the forms. And having said this, it is one more example of how the left is in Spain.

-From a distance, how do you see the 'Feijóo effect'?

I see it in my own land. We have recovered many hopes at the national level. Many people who told us that it was difficult to have a PP president in Moncloa now tell us that it is very possible. It is a first phase of the 'effect'. There is still a lot left. Is not easy. But we have recovered the illusion.

-How much is left to the legislature?

-Ask Mr. Sánchez. He probably doesn't even know it, because as he lives from day to day... I'm sure that when elections are called, he will respond to his personal interest, not even those around him, much less the PSOE or Spain. I don't think he'll spend a minute on that.

- And to the autonomic one, that only depends on you?

-We characterize ourselves by having an extraordinary normality. We like to stick to programs. We are in the middle of the legislature.

1 The Generalitat "induces" students to use... 2 The former minister of Igualdad Leire Pajín will... 3 A 39-year-old man dies after going off the road with... 4 These are the pensioners who will see a rise of up... 5 The CEO of Freedom Finance underlines the need for... 6 The crazy dances of the Australian goalkeeper that... 7 This is how fashion experts take swimwear beyond the... 8 José Andrés achieves his dream in Washington: he... 9 Farther, much faster and for longer: this is how the... 10 US Envoy meets with Lebanese to discuss border dispute... 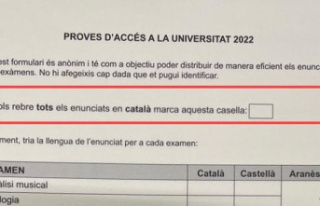 The Generalitat "induces" students to use...