Since its construction at the end of the 19th century (1891-1893), Casa Botines has become a symbol of the city of León, one of its most recognizable buildings. 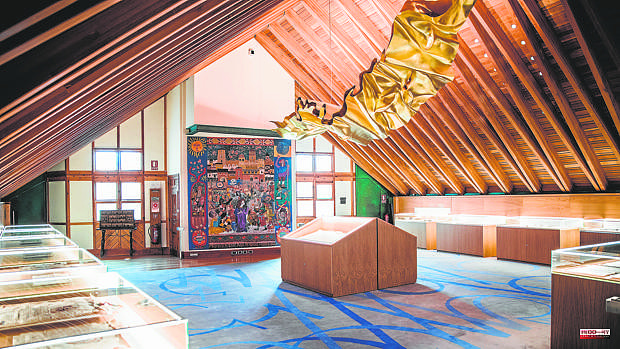 Since its construction at the end of the 19th century (1891-1893), Casa Botines has become a symbol of the city of León, one of its most recognizable buildings. However, it was not until just a few years ago, in 2017, that the 'stone dragon' that Antoni Gaudí designed for the capital opened its doors to the general public. It did so hand in hand with the Fundación Obra Social de Castilla y León (Fundos), which turned its spaces into a museum and valued the treasures it kept in its entrails. This is how the Museo Casa Botines Gaudí was born, today "a museum in its own right, with more than 1,500 square meters of exhibition space and with a wide and continuous educational and cultural offer", as its director, Noemí Martínez Murciego, points out.

Its history is short, but this has not prevented it from being one of the fastest growing private museums in Spain and one of the most visited in Castilla y León, the second in terms of popularity. It accumulates almost 450,000 visitors from 87 countries and has been awarded different recognitions, among which the Castilla y León Prize for the Arts 2021 and having risen as one of the finalists for the award for Best European Museum of the year 2022, failed the last May.

Fundos recovered for León and for the world an emblematic building by one of the greatest architects of all time. It is one of his only three works built outside Catalonia, together with the Capricho de Comillas (1883-1885) and the Episcopal Palace of Astorga (1859-1893) and the cornerstone of all of Gaudí's work, in which he was able to test innovative structural solutions , symbolic and decorative that he later applied and that gave rise to many of his most significant contributions to the history of design and architecture. It is also the first house of neighbors of him. The commission was received from two Leonese merchants who were heirs to a fabric store and a banking house, and in 1929 it became the headquarters of the central offices of the Caja de Ahorros y Monte de Piedad de León, which acquired the building that most Later it belonged to Caja España, which reformed it and recovered some of its original elements.

Precisely the history and architecture of Casa Botines and the figure and work of its architect are two of the three main thematic avenues of the Museum's permanent exhibition, along with the Fundos collections divided into fine arts, decorative arts and documentary. The first is the result of the acquisition and patronage of the old provincial savings banks of Castilla y León and the entity into which they ended up merging, Caja España, and is made up of some 5,000 works of art including painting, sculpture and graphic work; In the second, the pieces designed to be part of the Casa Botines stand out (furniture, curtains, fireplaces) and those that were in the building and that once belonged to their owners; while the third consists of a selection of documents that are exhibited in the basement of the building as a representative sample of the most interesting historical funds that make up the archive: the Condes de Luna Fund, the Royal Economic Society Fund Friends of the Country of León and the Fund Gaudí, where the original plans that the architect designed for the Casa Botines stand out.

In total, the pieces that make up the permanent exhibition occupy more than 1,500 square meters on four floors, but in this Museum - "whose history is yet to be written" but which "plans its future as constant renewal", as explained by its director - there is also room for much more. Several temporary exhibitions are scheduled annually in order to connect with society and attract it to the Museum, which also aspires to be a center for research, conservation and exhibition of its historical-artistic heritage and in which multiple informative and educational activities also take place. and, in addition, in its halls the realization of different acts is allowed.

An example of the breadth of its offer is reflected in the events organized to commemorate the 130th anniversary of the building's construction, which will culminate in December and which have been recently presented. Among them, the summer course ‘Gaudí in León. 130th anniversary of Casa Botines', the conference 'Gaudí, the house of symbols' or an exhibition of 'memories' with the building that will be made up of photographs sent by citizens, among other initiatives. The ultimate goal is to celebrate the history of a building that gives shelter and meaning to a Museum that feels the support of the public and that hopes to continue growing by its side.

1 Triple Big Door in Fuensalida 2 Spain completes the additional deployment in Latvia... 3 Mazón: «Puig continues to advance in the dismantling... 4 Ouigo puts its 'low cost' AVE tickets on... 5 They arrest a worker and two former employees of a... 6 Martí Caballé, Luis Santana, Zukan and Samuel Diz,... 7 Ten keys to the raging fire 8 More than 11,200 kilograms of stolen oranges with... 9 Arrested for assaulting, intimidating with a knife... 10 They find the body with signs of violence of a man... 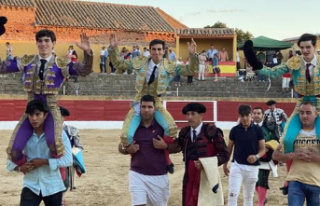