The Beauce policewoman injured last summer by a mad shooter she had just intercepted on Highway 73 received the highest distinction of Police Appreciation Day on Monday in Nicolet. 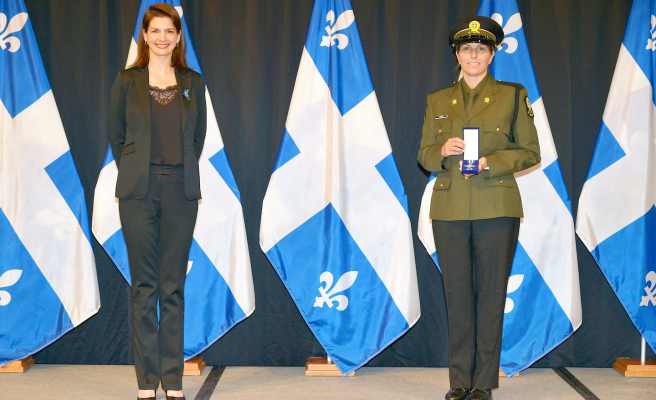 The Beauce policewoman injured last summer by a mad shooter she had just intercepted on Highway 73 received the highest distinction of Police Appreciation Day on Monday in Nicolet.

• To read also: Waiting for 2 lungs, he saves a toddler

Agent Catherine Giroux, from the SQ post of the MRC de La Nouvelle-Beauce, was decorated with the cross of bravery.

On August 18, she intercepted a motorist for speeding in Sainte-Marie on the Robert-Cliche highway before the routine intervention took a dramatic turn.

While making the usual findings inside her vehicle, she saw the motorist next to her car pointing a gun at her. The man fired and Ms. Giroux was injured in the hand, shoulder and face.

She manages to back up to safety before calling for reinforcements. Once they arrive, she manages to give them details about her attacker.

Not only did his courage and presence of mind save his life, but it also made it possible to find the suspect 12 hours later.

The suspect, Marco Rodrigue, is accused in particular of attempted murder and carrying a weapon for a dangerous purpose. He is due back in court on June 20.

On November 24, 2019, officers Sandra Normand and Émanuelle Simard of the SPVQ rescued a woman inside a dwelling when the building was engulfed in flames. They also guided the firefighters to another person to be rescued. The two residents were not injured.

Lévis police officers Raphaël Fawns-Faucher and Jimmy Hudon rescued a person trapped on the second floor of a burning house in the summer of 2021.

Finally, Sergeant André-Pierre Doré and Constable Éric Lapointe from the SQ station in Chandler, in Gaspésie, were honored for their intervention during a fire in a residence for seniors on January 2, 2020.

In addition to the 12 heroes of the Halloween attack in Old Quebec, three other citizens of the Quebec region received a citation of honor for their extraordinary acts.

On September 10, 2021 in Saint-Raymond, despite the invectives of a woman on the spot, Priscille Carrier approached a car whose driver is unconscious. She stopped the car, called the police and picked up the two children in the back seat. The driver died of a gunshot and the police quickly arrested two suspects, including the woman who tried to prevent Ms. Carrier from intervening, thanks to her intervention.

When the water in the river was at a temperature of 0.5°C on December 31, 2020, Patrick Racine, from Quebec, brought to shore a man who was voluntarily and dangerously advancing into the depths of the river.

Finally, immunosuppressed and awaiting a lung transplant, Samuel Boisvert, from Quebec, made an incredible effort given his abilities to help a 3-year-old toddler who was choking.

The ceremony took place face-to-face for the first time since 2018 after the 2019 floods and the pandemic.

1 12 shadow heroes honored 2 Mission accomplished for the Océanic 3 Zelensky celebrates the evacuation of 264 soldiers... 4 The United States will restore commercial flights... 5 The United States Air Force successfully tests a hypersonic... 6 Israeli security forces break into funeral of young... 7 Circuit Gilles-Villeneuve: the new paddocks take on... 8 Stock PS5: console back this Tuesday? Follow the restocking... 9 The hard core of the friendships of Juan Carlos I 10 The beauty of Basque pelota according to the BBC 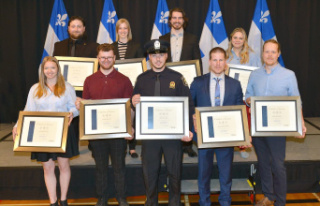