On a sunny and hot morning, the last Sunday Planazo of the Spring Season was held at the Madrid Hippodrome, with a large audience, who enjoyed the excitement of the horse races, the show and the gastronomy. 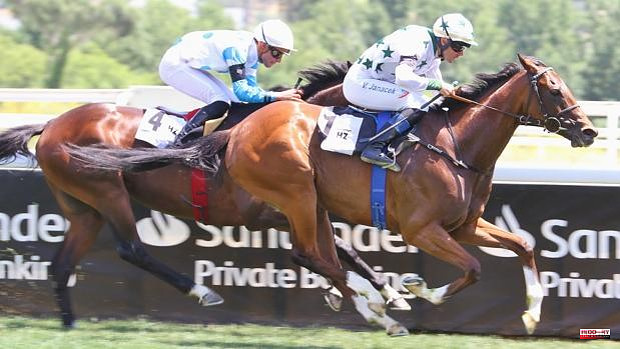 On a sunny and hot morning, the last Sunday Planazo of the Spring Season was held at the Madrid Hippodrome, with a large audience, who enjoyed the excitement of the horse races, the show and the gastronomy.

The morning began with the first race, the Premio Satrústegui, for three-year-old colts and fillies. Four candidates for victory. 1,600 meters of travel. Portalma quickly comes out of the boxes marking a false rhythm, closely followed by his three rivals, closing Maamur. In the final stretch, the participants pair up and Maamur, with a better change of pace, coming from the outside, achieves a nice victory. Portalma, despite doing a strange thing in the final meters, held on to second place, coming within half a length of the winner.

Diva Victoria was third, half a length behind.

In second place, the Játiva-Gastrofestival 2022 Prize, handicap second second part, for horses and mares four years and older, over a 1,200-meter sprint in a straight line, was disputed. Twelve participants. Kohoof, Bee in Your Bonnet and Derdas, who had the three outermost boxes, decided to attack from the start completely outside, risking the race between the three. Kohoof was ultimately the fastest, surprising his victory, which was trading almost 21 to 1. Bee in Your Bonnet's second place was even more of a surprise, since it was trading almost 32 to 1. The twin paid 572 euros for a euro and there was only one winner of the Trio bet who took 4,349.80 euros.

The third race was the Celtic Rock Award, for three-year-old colts and fillies. Ten contenders for victory started from the 2,100 meter pole. Beautiful race with a super exciting ending. Pantxineta soon took the lead setting the pace of the test. Already in the final stretch he tried to become strong by the posts and, when it seemed that he could get the victory, several horses finishing off with great force caught him in the same goal post. The victory went to Cham's Dream, very well led by Nicolás de Julián. Second, a neck, came Arenas de Sanpedro, being third to a head Six Rivers, who also by a head left Pantxineta fourth. Corvera was fifth to a head. Spectacular arrival.

In fourth place was the Francisco Quílez 'Quilates' Prize (Lototurf), first part handicap, for horses and mares four years of age and older, also over a 1,200-meter sprint in a straight line. Eleven participants. Bosnia, also coming from the outside lanes, dominated the lot quite reliably, winning with great authority. Haddaf, who corresponded to the starting box number 1, made the entire race for the posts being a very good second almost two lengths behind the winner. Third was Rogue, who also came from outside, showing that it is difficult for him to fall from an arrival.

In fifth place was the Rheffissimo-Mahou Prize, for horses and mares four years old and older. Eight specimens started from the 2,400 meter pole. Preparation for the Madrid Grand Prix. The Way of Bonnie gave his rivals no choice, proving his superiority in his first performance of the year. Always in the race, he waited for his moment in the final stretch to take the victory with great ease. Due to the way he wins, he should be the main candidate for victory in the next Madrid Grand Prix. I also really liked Stour, he was the only one who tried to face the winner. Third, finishing off the finals, came Qatar River passing a gray Lorthofthehorizon.

He closed the morning in sixth place, the Premio Príncip Duero (sponsored by Pronoturf), descending handicap, for horses and mares three years and older, also over the distance of 1,600 metres. Seven candidates for victory under the orders of the starter. Paderno, making a waiting race, entering last in the final stretch, with a beautiful change of pace coming from the outside, managed to win with relative solvency. Oceanic Blue, also with a nice shot coming from behind, took second place by reaching a length. Vegadeo, who scored a lot in the final stretch, had to settle for bronze entering the goal post, a quarter of a length later.

On this penultimate day of the PonyTurf Championship, two races were held. The first, Solán de Cabras Award, was the winner Piropo with the young rider Olivia Hernández; and in the second, Solán de Cabras Multifruit Award, the winner was Lucero with Noa Velasco. Next Saturday, June 4, we will meet the winners of this first season of the championship.

1 Mikel Landa returns to the Giro podium seven years... 2 After the Texas massacres: US legislators say that... 3 Football / District 1. The title, the victory and... 4 Alpes de Haute Provence. Estoublon: A 50-year old... 5 Worthy-les-Bains. A teenage girl faints while hiking... 6 Lot-et-Garonne - Stuck for 2 hours and 3 minutes from... 7 UNITED STATES. Biden came to Uvalde, Texas in order... 8 Fire in an industrial warehouse in the Port of Barcelona 9 More than a thousand people recover the Pronisa Great... 10 Sequoias, barbecue and an electoral conspiracy: the... 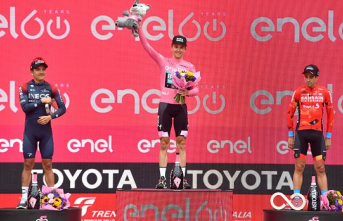