A cry for help was the first sign of the latest tragedy that has shaken the US: fifty undocumented immigrants died this Monday in the back of a truck that helped them enter the US illegally. 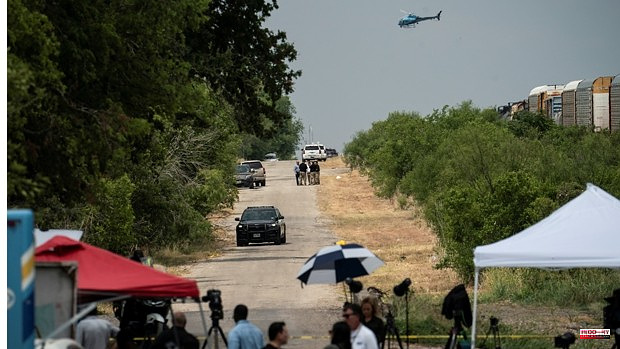 A cry for help was the first sign of the latest tragedy that has shaken the US: fifty undocumented immigrants died this Monday in the back of a truck that helped them enter the US illegally.

It happened on the outskirts of San Antonio, Texas, a city that was only beginning to overcome the shock of another tragedy: an hour and a half away, in Uvalde, 19 children and two teachers died last month in an elementary school in a shooting perpetrated by an 18-year-old.

The truck was stopped on Quintana Street, in an unpopulated area of ​​San Antonio, between train tracks, lots, junk shops and vacant lots. A little before six in the afternoon -already early yesterday in Spain-, a worker from a nearby business heard a cry for help, according to San Antonio Police Chief Bill McManus.

The man approached the place, where he found an 18-wheeler-trailer, with the door of the truck box ajar and with dead people inside.

The vast majority of the deceased were inside the box of the truck. Authorities found at least three bodies outside. It is possible that some, found several tens of meters away, managed to get out and lost consciousness shortly after. Three of the victims were found alive at the scene, but died at hospitals. Sixteen people - including four minors - were sent to medical centers.

Authorities acknowledged that the truck was likely carrying more people. The local newspaper 'San Antonio Express' numbered a hundred immigrants who were crowded into the box. McManus assured that yesterday search operations were planned in the vicinity of the place where the vehicle was found in search of other survivors.

At the moment, the authorities have not issued an official decision on the reason for the death of the immigrants, but there is no doubt that the heat and overcrowding were the determining factor.

There is still no information on where the truck came from and how long the victims were in the cargo compartment. It is known that in this area of ​​Texas the temperature was close to forty degrees on Monday, the same trend as in recent days, in a month of June that is going to be close to breaking historical heat records in the region.

San Antonio Fire Chief Charles Hood said that when authorities arrived, many of the survivors were still inside the box of the truck, without the strength to get out on their own. Many of them could barely moan and those who were transported to hospitals were hot-bodied, Hood said.

The firefighters verified that in the compartment where the immigrants were going there was no air conditioning system in operation, nor was there a trace of bottles of water to combat the heat.

The nationality of some of the victims had been determined at press time: twenty-two Mexicans, seven Guatemalans and two Hondurans, according to Mexican Foreign Minister Marcelo Ebrard on Twitter.

The head of Mexican diplomacy added that he had spoken with the Mexican attorney general to open an investigation into the event, and that a team of investigators had been sent to Texas.

The president of Guatemala, Alejandro Giammattei, also lamented on Twitter that it is “inexcusable that innocent lives continue to be lost due to the trafficking of immigrants” and demanded “mechanisms for tougher sentences and that coyotaje be a crime for extradition purposes.” His Foreign Ministry assured that the country's consulate in McAllen (Texas) had hired forensic experts who defended that the probable cause was "heat stroke due to overcrowding."

In other similar tragedies in cargo compartments of trucks without an air conditioning system, it was found that the temperature inside the box could rise to 78 degrees. It happened in 2003 in a similar truck in which 19 immigrants died in the same region of South Texas. Similar events have occurred since then, but this Monday's is the most tragic on record in the US.

It occurs in the midst of a record wave of immigrants entering the southern border of the United States, which has been accompanied by an increase in deaths of immigrants who undertake this journey. Many do it through 'coyotes', people smugglers who facilitate their journey from their countries to the border, guide them on how to cross it without being detained and, many times, arrange transportation once they cross the border to cities with services. and well communicated from where you can continue on your way.

The border police have ensured that you find more and more bodies scattered in the desert areas of the border. Many times they are left behind in the groups led by 'coyotes', injured or exhausted. And the situation could get worse: migrant inflows routinely drop at the peak of summer, when conditions are most difficult. But last year, in the midst of a wave of immigrant arrivals, they rose in July to their record. And this year they could beat it.

1 The G7 increases the pressure on Putin and prepares... 2 Escrivá's assignments to save the self-employed... 3 This is the judicial “ordeal” to enter the National... 4 Delgado faces his first Fiscal Council after the punishment... 5 The Bildu-Sánchez pact in the Democratic Memory Law... 6 Carmen de Rivera: «The best thing about Ciudadanos... 7 Spain and the US resume dialogue after an agreement... 8 The murderer of the Lardero boy, transferred to Logroño... 9 There is a message for you: celebrities learn to monetize... 10 30 percent more lifeguards and surveillance even by... 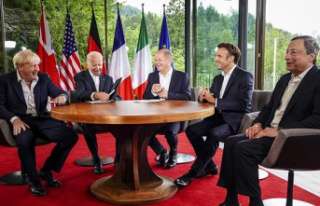 The G7 increases the pressure on Putin and prepares...