The TDC changes its name

As part of the TDC's rebranding happens a change of name for the part of the group, which stands for network and digital infrastructure. The new name was pre As part of the TDC's rebranding happens a change of name for the part of the group, which stands for network and digital infrastructure.

The new name was presented internet Friday, since held launches in Aarhus and Copenhagen. And what is the new name then?

the TDC NETWORK. It writes the Danish Marketing.

More than 3000 names was up to turn over, before you came forward to exactly TDC NETWORK was the right choice. Before it was called the TDC NetCo.

the name change happens after TDC Group in June, a division of the company into two independent legal entities :

Infrastrukturenheden TDC NETWORKS and the digital service unit Nuuday, as Yousee, Telmore and Fullrate belong to.

the Change happens as a part of it and telekoncernens planned rebranding.

And it will also could be completely physical.

the Logo is changing: a bit of, tells Mikkel Lind, which has the title 'Vice President, Head of Marketing, Communications & Online' at TDC NET:

"most danes know the blue rumbe, which has been a part of our visual identity for many years. The we bring forth as our icon of the new brand, which gives us a lot of freedom in the creative and will help us to build on our identity."

in Addition to the new name and logo comes a new slogan:

'We connect Denmark. For the benefit of all.'

1 Few companies account for a very large part of Danish... 2 'Dancing with the stars' or 'The big bagedyst': 'I... 3 B. T.'s Formula 1 expert: Magnussens season developed... 4 Slutrundedebut are fløjspillers revenge for the european... 5 Young golfdansker play in south Africa 6 Police call for drivers after accident 7 Police: Suspect is dead after attack in London 8 Iraq's prime minister retires and gives space to the... 9 A week was He a 'valued customer' - now she is excluded... 10 Britta broke under the dramatic day in court: I felt... 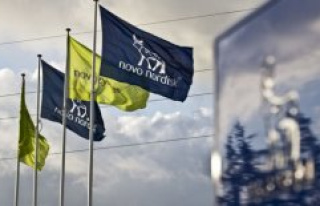 Few companies account for a very large part of Danish...