Mette F.: We work hard politically for a green transition

Klimalov and money to green research shows that the government is working on the conversion to a green economy, says the prime minister. It was gloomy reading 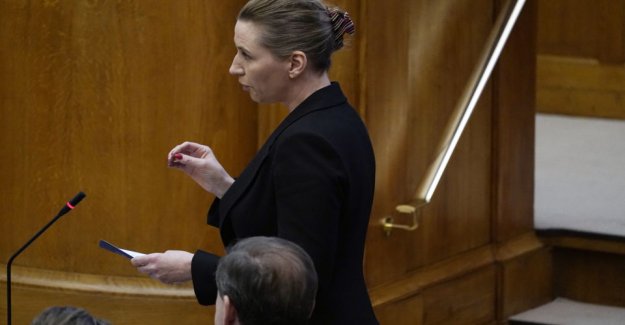 Klimalov and money to green research shows that the government is working on the conversion to a green economy, says the prime minister.

It was gloomy reading, when the united nations in a report Monday concluded that the level of greenhouse gases in the atmosphere set a record in 2018.

so says prime minister Mette Frederiksen (S) in the introduction to Tuesday's question hour in the Parliament.

- the Level of greenhouse gases has reached a historic level in a time where there is a need for it to fall. It stresses the need, that we do more. It makes many danes already, that they toil for the green transition.

- But we must also knokle for it in Parliament. I am glad that a broad majority in the Danish Parliament supports an additional one billion to green research.

- We are working on a klimalov before christmas, and in the ministry of Finance behind me draw it for us with the budget can get more new decisions, which can support the green transition.

- It represents, in short, that we can take the first steps to deliver on the big words from forståelsespapiret, says the prime minister.

Just a climate action stands as the Sekabet top point on the forståelsespapiret, as the government together with støttepartierne negotiated in June.

Here, it says, among other things, that Denmark must take the lead in the fight against the climate crisis.

SF's chairman, Pia Olsen Dyhr, also takes the issue of climate up to with the debate. She sees a need for ambitious targets - both globally and in Denmark.

- It will be interesting whether the reductions must be national, or whether, ultimately, we probably can buy some indulgences in the world, because it becomes too difficult.

- Are countries such as Denmark do not have to commit to domestic reductions, so we deliver on the challenges we faced with, was the question.

To the corresponding Mette Frederiksen, that she shares the concern.

- Once we have registered a 70 percent goal that the whole basis of the government's work, so it's all about Denmark and our emissions. It is charged with.

- So, I am hoping for a binding and ambitious klimalov, but also gives leeway to make the wisest and most long-term decisions, reads the answer from the minister, who will not comment directly on the current negotiations. South Korean chef the plaintiff Michelin to include...