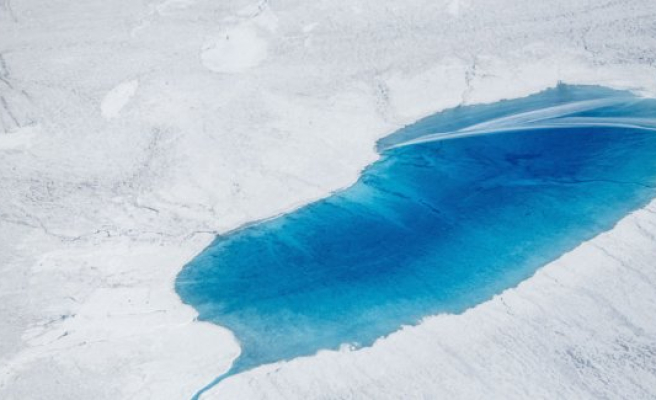 the Melting of the greenland ice sheet is now seven times stronger than in the 1990s, warns the international team.

the Greenland ice sheet disappears now seven times as fast as in the 1990s.

the Meltwater from the greenland ice will mean that 100 million people in the the planet's coastal areas each year come to experience flooding at the end of this century - if the current pace continues.

It concludes an international team of 96 polar explorers on Tuesday in the scientific journal Nature. They are working on 50 universities and research institutions across the globe.

Since 1992, Greenland has lost around 3.8 trillion tonnes of ice - enough to raise global sea level with 10.6 millimeters.

the Pace is increased from 33 billion tonnes of ice annually in the 1990s to an average of 254 billion tons per year in the past decade.

the Nature-study gives, according to the authors the so far most comprehensive picture of ice loss from Greenland. It is led by professor Andrew Shepherd from the University of Leeds and dr. Erik Ivins from Nasa's Jet Propulsion Laboratory in California.

Denmark has among other things, DTU Space, Geus, DMI, and the University of Copenhagen participated.

- As a rule of thumb is that for each cm global rise in sea level exposed a further six million people in the coastal areas for floods, says Andrew Shepherd in a press release.

The total increase in the oceans will expose about 400 million people for the flood in the year 2100.

- This is not unlikely events or small effects. They happen and will be devastating for coastal communities, stresses Andrew Shepherd.

the Melting peaked in 2011 with a loss of ice on the 335 billion tons, and is then flattened out. Nature-study do not include the big melt in Greenland in the summer of 2019.

The Danish klimaprofessor Sebastian Mernild, director of the Nansen Centre in Bergen, has contributed with data from east Greenland.

- More people will be affected by the floods - about 40 million more than expected. It is an important message.

- There are fewer, there goes the house of the past, and it is worrying in itself, he says.

Conclusions is compelling and provides a good ballast for the politicians on the decisions they must make. They are also providing a good foundation for the sixth assessment report from the UN intergovernmental panel on climate change, which comes in 2021, says Mernild.

1 Paradise-Amalie's uncle goes bankrupt with another... 2 Dane gets the top position in the european Court of... 3 Ethiopian politician: War is the epitome of hell 4 Lawyer Jakob Buch-Jepsen appalled by the discrimination 5 Here are the charges against Trump 6 Aung San Suu Kyi sat motionless and heard about the... 7 Hungary breaks european UNION rules, with criticism... 8 Transgender was the WORLD cup-dropped: May not bathe... 9 Violent man ravaging jysk village: 'It's like a nightmare' 10 Frustrated Sarah Iversen before the WORLD cup crash:... Paradise-Amalie's uncle goes bankrupt with another...