If you came running at Vejlby Festival at Randersvej in Aarhus on Saturday afternoon, you have probably been able to see a somewhat violent vision. the Incide If you came running at Vejlby Festival at Randersvej in Aarhus on Saturday afternoon, you have probably been able to see a somewhat violent vision.

the Incident unfolded around the bell 17.26, where police got a report at 112.

A young man stood in the middle of the street in Aarhus and waving a palestinian flag.

It got people to call after the police.

Not least because the man also had a knife.

It explains the vagtchef Flemming Lau to B. T.

"It is true we have arrested a man who stood in the middle of the road and waving a flag and had a knife. We got the message at 17.26 and drove out there," says Judy Lau.

"There is talk of a 25-year-old man, and we are now about to find out why he stood and waved a flag and had a knife," says vagtchefen.

He says, however, that they do not need to put too much in the young man's waving of a palestinian flag.

"He has of course attracted a lot of attention when he stood in the middle of the road like this."

"But we don't know yet if he has been affected or is sick," elaborates vagtchefen.

Police are now in the process of finding out what led to the incident, which ended when the cops came to the spot and had arrested the 25-year-old man without any kind of trouble.

1 A brewery from 1899, will be to the national ølcenter 2 The French occupy the lead roles in Real Madrid victory 3 Pumps the smoke out and paints the sky orange: Only... 4 Big triumph for Solskjær: Beats arch-rivals after... 5 FCM-the boss of the economy in denmark: One must be... 6 Klimalov is in place: The huge political battles lie... 7 The police afblæser: Have not found the pedestrian 8 The internet is raging after the racism incident in... 9 Lived just over the drabsoffer: 'It could have been... 10 Dramatic scenes in Paris, blood and tear gas in the... 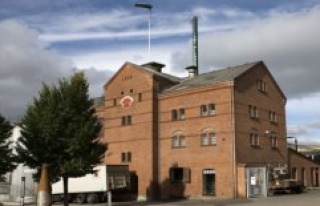 A brewery from 1899, will be to the national ølcenter