The day before the NATO summit has already left the first attempts at rebellion this morning. 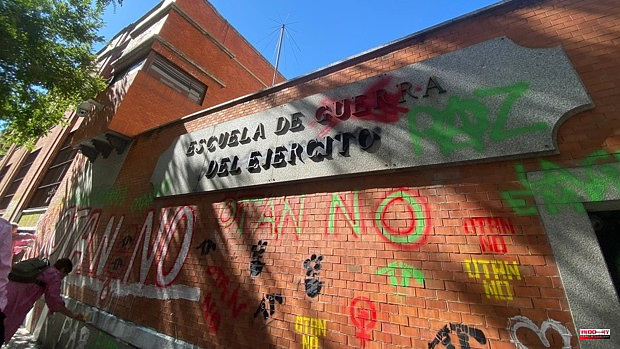 The day before the NATO summit has already left the first attempts at rebellion this morning. At 10:30 a.m., the National Police appeared on the street of Santa Cruz de Marcenado (in the district of Centro), after some thirty activists from DesarmaMadrid and other groups painted and placed stickers against the summit of the NATO on the façade of the Army War College. Upon arrival, the agents found a sit-in in a pedestrian area and proceeded to identify those involved.

However, the concentrations have refused to provide their data, so up to 29 individuals have had to be transferred to the Arganzuela police station to be identified.

Despite the fact that the Twitter account of the Madrid Anti-Repression Movement has published that at least 28 people had been arrested, the Superior Headquarters of Madrid has confirmed to this newspaper that none of them have been arrested.

The demonstrators have displayed banners that read "war starts here, let's stop it here" and "NATO no." This protest is part of a series of movements promoted by groups of the extreme left, which for days have been announcing a mobilization for tomorrow, Wednesday, in the Tirso de Molina square.

The call, scheduled for 8:00 p.m., comes after the Government Delegation in Madrid prohibited an initial march on Calle de Atocha "for security reasons." The new concentration has not even been communicated, which could lead the National Police to prevent any attempt at a demonstration.

On the other hand, around thirty activists from 'Extinction Rebellion' and 'Fridays for Future' have lain down for ten minutes in front of Picasso's 'Guernica' at the Reina Sofía Museum. Those responsible have collapsed on the ground "pretending to die while four of them, dressed in gala and pretending to be great leaders, toasted the sound of Brahms's Third Symphony."

After that, they have been evicted by the museum staff without the painting or other elements of the space being affected. In this action, they have also displayed banners with messages such as 'War is the death of Art' and 'Here the lords of war will meet', alluding to the different meetings that the more than 40 delegations of members and supporters of the North Atlantic Treaty Organization at the Prado and Reina Sofía Museums.

1 This was the catastrophic failure of the Russian air... 2 Amazon eliminates inflatable plastic pillows in its... 3 Strong Badosa debut at Wimbledon 4 Culture extends the deadline to save Inaem's... 5 Why Ceuta and Melilla are not in NATO 6 The Diputación de Alicante increases its Plan Plan... 7 Asaja and the irrigation community request emergency... 8 Eight minors arrested in a fight with weapons between... 9 Felipe VI, at the NATO summit: "Europe has remained... 10 Escrivá saves the self-employed reform by halving... 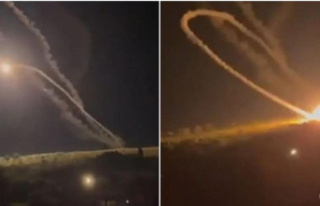 This was the catastrophic failure of the Russian air...