20 rogue shots: Lobos Negros and their disco book of poems

Luis Martín, voice and lead guitar, and Ricardo Virtanen, drummer, are pillars of Lobos Negros, the already legendary rock and roll group from Talaveran that, for four decades, has had a firm connection with Villa y Corte to the point of forming an important part of the Madrid scene, as recognized by all retrospective studies and reports. 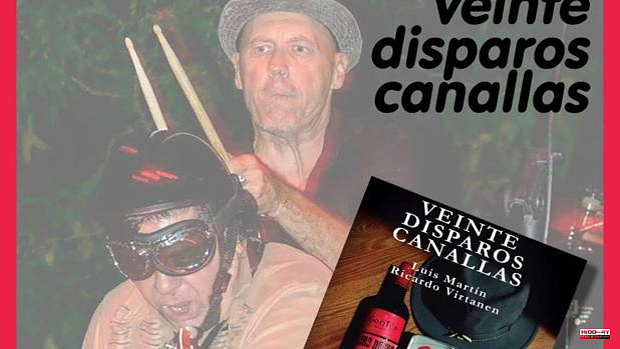 Luis Martín, voice and lead guitar, and Ricardo Virtanen, drummer, are pillars of Lobos Negros, the already legendary rock and roll group from Talaveran that, for four decades, has had a firm connection with Villa y Corte to the point of forming an important part of the Madrid scene, as recognized by all retrospective studies and reports. We are not going to go back to the common, fused origin of music and poetry, which have never been too far apart when they have what it takes: rhythm and emotion. Suffice it to recall the controversial Nobel Prize awarded to Bob Dylan, who had previously recognized Smokey Robinson as the 'poet of America'.

The poetics of the r

Explosive blondes, coruscating toupees and leather jackets, Hopper-style desolate bars, gas stations where the boss dozes, highways with an uncertain course, the Harley as an icon (although other icons are also admitted, Bonneville, etc., as long as it is not about japopepinos), drunkenness as a balm for heartbreak, a beach with two glasses half-buried in the sand. They are clichés, let's admit it, but poetry is all based on topoi: the greatest (Jorge Manrique, Góngora, Villamediana, Lope de Vega, Pessoa, Lorca, León Felipe) used them, although they managed to transcend them. In these 20 rogue poems/shots by Luis Martín and Ricardo Virtanen these themes emerge with authenticity and feeling, with an open heart and an open grave, like a motorcycle skirting cliffs in the Almerian or Ibizan night. But above all, after reading it, which is pleasantly captivating, one says to oneself: the poetry of rock and roll, beneath its rogue appearance, what it actually hides is emotions, tenderness in abundance.

Luis Martín is direct: he shoots his verses like bullets and sometimes transforms them into flowers. He considers himself a 'knight of the Harley order'. He is a motorcycle man. Motorcycle, road and rock and roll, the triad that makes him reborn. The rain, another element of the rock scene, wets his songs, although he has hard roots, "like a bridge over an ancient river" and consoles himself by evoking the artists of Sun Records (Carl Perkins, Johnny Cash, Jerry Lee Lewis , Elvis), with whom he identifies to start «instants of madness, rock'n roll that waters devilish arteries». He sometimes gets existentialist and seems to transport us to that San Francisco of the late 50s in which emerging rock was superimposed on the bebop of the jazz caves that Jack Kerouac frequented. And he writes that «it is no longer worth taking refuge in sad songs» because «we are a rogue song, / an eternal ballad, / a slap in the face of time». And yet he writes a love poem on paper wet from the rain and his tears. He perhaps agrees to retain one of his final verses: "He who hits the hardest is not the hardest, but the one who endures the most."

Ricardo Virtanen brings another facet of poetry, with an analogous rocker spirit but a format more identifiable with current printed (or digital) poetry. In Luis Martín there is a continuum between the rock lyricist and the poet. In Virtanen it is more Guadianesque, more subterranean. Under the patronage of Dylan, he proposes some slogans in his Almost Song, such as swimming against the current, being Ulysses without ever forgetting Penelope or looking at the sea if that makes you invulnerable. All sound, lucid and sensible. In Blues and closure, he records that "it's time to kiss", to immediately evoke Jim Morrison, dead at 27, one of the exquisite corpses of rock Olympus, noting that "a dream is not easily founded". And it is that "time escapes everything through the dirty tempo of the streets of blues" and "the real evaporates in the aftermath of a broken calendar, drunk, without my name". In the end, what is life but «that false coin you threw / to the strange cliff of the night».

'20 bursts, then, of poetry', 20 accurate shots of emotion, lived life, music and poetry. But it is that this literary installment of two Black Wolves is accompanied by a live compilation, a live recorded at the Honky Tonk in Madrid, with their most emblematic songs and cameos as interesting as those of Edi Clavo or Víctor Coyote. Indelible themes, celebrated and danced throughout Spain but also in Finland, Estonia, Mexico, Austria, France or England: such as Dancing with Wolves, My Friend the Shaman, Surfin' Bird or Mysterious Train to Arganda, along with instrumental pieces (whose verses are the riffs of Luis Martín) as Wipe out. A whole sample of the best Hispanic rock'a billy of the transit of millennia.

As the editor of La Discreta, Santiago López Navia, writes: «You have in your hands a rare and precious treasure, reader and fan. Enjoy the experience, empty in your soul the two poetic ammunition magazines that await you in these pages and treat yourself to a unique moment dancing with wolves«.

1 The husband of one of the teachers murdered in the... 2 The CES recommends strengthening tax incentives to... 3 CC on the visit of Albares: "for what he said... 4 The imagined word (5): With the birds 5 Felipe VI, in New York, receives the medal of the... 6 Meghan Markle visits the Uvalde victims' memorial... 7 These are the cheapest hours of electricity for Friday,... 8 The Zaragoza Court buries the Gali case and criminally... 9 "She stained her best friend's blood":... 10 Guns are now the leading cause of death in children... 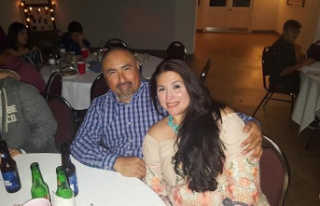 The husband of one of the teachers murdered in the...