Within the 'Bocalba' operation carried out in the towns of Manzanares and La Solana, in the province of Ciudad Real, several points of sale of narcotic substances have been dismantled, carrying out the arrest of 13 people and 5 house searches in which they have been apprehended. 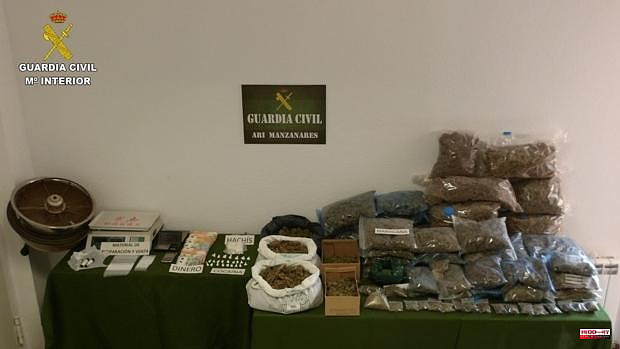 Within the 'Bocalba' operation carried out in the towns of Manzanares and La Solana, in the province of Ciudad Real, several points of sale of narcotic substances have been dismantled, carrying out the arrest of 13 people and 5 house searches in which they have been apprehended. lots of drugs.

The operation began in October of last year, with the aim of locating the main drug sales points both in Manzanares and in surrounding towns, initially observing that there were two points of sale connected between this town and La Solana, in the that cocaine, marijuana and heroin were distributed, the Civil Guard reported in a press release.

After carrying out an important investigative work in which the sale of drugs in different addresses of these two localities is corroborated, in a first phase the entry and search of an address in Manzanares is authorized by the judicial authority, in which three people are arrested and 11.5 grams of cocaine and 3.5 of heroin are seized.

Continuing with the investigation, it was confirmed that it was an organized criminal gang, in which each of its members had a specific function, selling these substances both from homes and distributing them on demand to consumers and secondary distributors. Proof of this was the arrest of one of its members when he was about to sell 1,500 grams of marijuana to another distributor.

Finally, in June of this year, 4 house searches were carried out in the town of La Solana, with which this operation was concluded with the arrest of 9 more people. The detainees are accused of crimes against public health (drug trafficking), belonging to a criminal group and electricity fraud.

The proceedings, along with the detainees, have been made available to the Courts of Manzanares (Ciudad Real).

1 'The era of fear' and 'The House of... 2 Traffic cuts and prohibited parking in Valencia on... 3 Mazón: «Puig diverts money from schools to set up... 4 Arrested for defrauding foreigners who were charged... 5 The Fuse Group Acquires Spanish Visual Effects Studio... 6 As anti-coup groups protest, talks to end the Sudan... 7 EU legislators vote to ban combustion-engine cars 8 Tunisia: Lawyers and Striking Judges protest President's... 9 Castilla-La Mancha will pay this month 10.4 million... 10 North Macedonia's ex-leader, now fugitive, is...