Still deeply marked by what they saw a year and a half after the tragedy, 12 heroes who rescued the victims of Carl Girouard's murderous madness in Old Quebec on Halloween 2020 were honored Monday for their bravery. 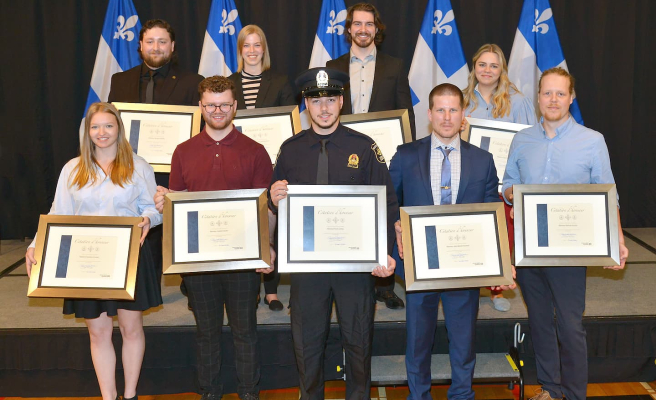 Still deeply marked by what they saw a year and a half after the tragedy, 12 heroes who rescued the victims of Carl Girouard's murderous madness in Old Quebec on Halloween 2020 were honored Monday for their bravery.

• To read also: A policewoman saved by her cold blood

• To read also: Waiting for 2 lungs, he saves a toddler

These 12 people were part of the group of 15 citizens and seven police officers from the Capitale-Nationale, Chaudière-Appalaches and Gaspésie regions, whose acts of courage were highlighted at the École nationale de police du Québec, in Nicolet, during of the annual police recognition ceremony.

This ceremony coincides when the author of the disastrous saber attack of October 31, 2020 is waiting to know the outcome of his trial. The jury must determine whether Carl Girouard was sane or not at the time of the events.

Four women and eight men have therefore received a citation of honor for having come, at their own risk, to the rescue of people in danger after having crossed the path of the killer.

Among her was the emergency physician Marie-France Rioux who went to Suzanne Clermont's bedside on rue des Remparts, not without arming herself with a baseball bat.

She had been alerted by her husband Bradley Purcell, also quoted, who was then in panic and in tears.

"I ran towards the victim while my spouse called for help and took care of the victim's spouse. At that time, she was still alive, but in very bad shape, ”explained Ms. Rioux the day after the tragedy.

She had performed heart massage on Ms. Clermont until the paramedics arrived.

Ms. Rioux and Mr. Purcell then believed that the victim had been hit by a car.

“I saw the lady on the ground and the guy across the street. I yelled at him to go get the car that had just passed. I screamed loudly, the whole Old Port must have heard me, ”said Mr. Purcell, who was in fact unknowingly addressing the killer, about 25 feet from him.

Also in the aftermath of the attack, Marie-Hélène Brown had launched a vibrant testimony on social networks which sums up the heroism of those honored very well.

“Our precious daughter Andréanne Careau, you have returned from your walk in Old Quebec. Safe and sound, but hands, coat, boots, pants and scarf reddened with blood because you were there, with your friend, a few seconds after the passage of this disturbed individual, to rescue a couple of French people seriously injured.”

“With your friend Josélito (Corneli), you heard people calling for help and you came running. You did not question your own safety. In the Frontenac staircase, you took the controls, called for help, made tourniquets with what you had on hand. You are so brave, I don't want to think about what could have happened to you."

“Few people know what a quiet and humble person you are despite your cheerful exuberance. Today I want you to accept thanks and congratulations, it is exceptional what you have done. Two people are still alive...".

Ms. Brown added the names of Chloé (Déry-Drolet) and Mathieu (Cloutier), a young couple who joined her daughter and her friend to save the injured.

Ms. Déry-Drolet and Careau as well as Mrs. Corneli and Cloutier are among those who received a citation on Monday.

Still deeply upset by the tragic events, none of the nine people who were on hand Monday to receive their honors wanted to speak to the Journal. They said it was still too difficult for them to talk about that sad evening.

"You, citizens, who are not police officers and who have courageously rescued people often at the risk of your safety and even your life, a big bravo", launched at the end of the ceremony the Minister of Public Security , Geneviève Guilbault, who presented the plaques and medals.

“The coolness and remarkable courage of these women and these witnesses to this dark event deserve to be highlighted,” said Andrée Doré, from the National Police Academy.

1 Mission accomplished for the Océanic 2 Zelensky celebrates the evacuation of 264 soldiers... 3 The United States will restore commercial flights... 4 The United States Air Force successfully tests a hypersonic... 5 Israeli security forces break into funeral of young... 6 Circuit Gilles-Villeneuve: the new paddocks take on... 7 Stock PS5: console back this Tuesday? Follow the restocking... 8 The hard core of the friendships of Juan Carlos I 9 The beauty of Basque pelota according to the BBC 10 Murder of Thomas Cameron: life imprisonment requested... 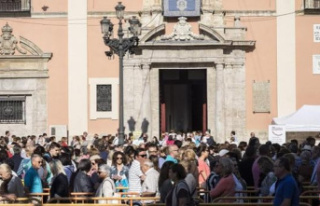