"I grew up with the cinema of the 80s, which used to be commercial and now it's classic. 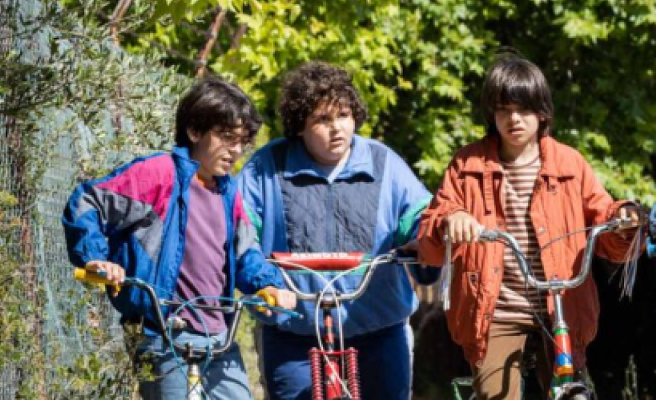 "I grew up with the cinema of the 80s, which used to be commercial and now it's classic." Grown up, Alexis Morante studied cinema in the United States, shot several shorts and, now at 43, premieres his first feature film that is a tribute to that childhood and to that eighties cinema that for today's children is pure classic. Oliver's universe, which reaches Spanish screens today, takes place in Algeciras during the passage of Halley's comet in 1985.

The young Óliver, who has just turned 13, is quite confused. His father has lost his job and the family has moved to his grandfather's house in Algeciras. They live persecuted by the tuxedo collector while Óliver is fascinated by his grandfather's delusions about Halley's comet, deals with the bad boys from the neighboring neighborhood and begins to have feelings for Irene, the girl who loves insects.

"I am heir to films like Back to the Future, Count on Me or The Goonies in which children are presented as intelligent beings," explains Morante in an interview with La Vanguardia, although he also declares that he is committed to "Andalusian cinema by Alberto Rodríguez or by Benito Zambrano" and does not hide his admiration for Víctor Erice, Julio Medem and the quinqui cinema.

Óliver's universe is based on a novel by Miguel Ángel González, Morante's schoolmate: "Miguel Ángel wrote this novel about his childhood, our childhood, but he did not publish it while waiting for me to make this feature film," recalls the director whose film parades the televisions without remote control, the slot machines, the One, two, three, answer again, the elephant foot jeans and many other moments that have marked the childhood of half of Spain.

The film, starring Salva Reina and María León, has some comedy, a bit of fantasy and a touch of Verano azul, but it is "also a social drama". Óliver suffers from his father's unemployment and his mother's desperation, who struggles to get ahead, while joining a soccer team that a priori gives him more trouble than joy.

To choose the youth cast, Morante's team did a casting among more than 1,000 children from Campo de Gibraltar from which "some of the actors who move naturally came out". But Morante found Óliver in a professional selection where he found Rubén Fulgencio, who "is an extraordinary boy" and who may become one of the familiar faces of Spanish cinema in the future.

1 The ETF of the financial sector (XLF) of the USA,... 2 How success in pop culture is concentrated in fewer... 3 Iberdrola will pay an extra dividend if the meeting... 4 Of a time and a country 5 The Ibex is reluctant to fill the imposing bullish... 6 Carlota Flâneur shows her weapons with the single 7 Six securities that escape the cuts of the Ibex 35 8 Citi strategists see more declines for growth stocks 9 Five movies to be fascinated by black holes 10 The universe of the 'cryptos' reels between...

The ETF of the financial sector (XLF) of the USA,...